Vincent Bonneau, Director of the Innovation Unit at IDATE, comments: “The consensus in the industry is that top five digital technologies for 2025 are AI, IoT, robotics, cybersecurity and Big Data. But we have identified in this report 10 other key technologies which will have a major influence on our digital future”.

According to him, they are seen as the most important ones for the future (but not necessarily the most valuable), and the ones that really stand out from other digital technologies. The top 15 technologies for 2025 are identified below: 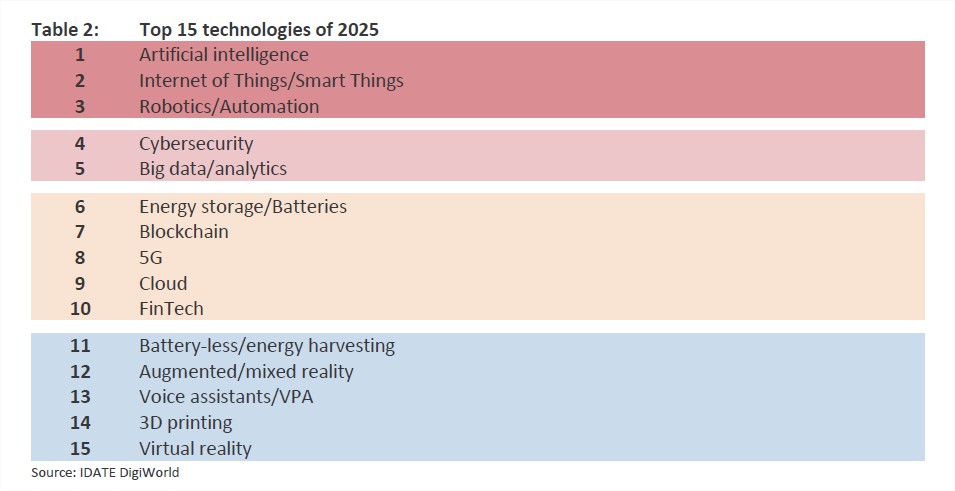 The future outlook for 2025 is now being built mostly around smart machines, which implies more focus on hardware technologies, with software remaining a major asset (especially smart algorithms). Digital innovation is no longer about the digital space itself and certain vertical industries with obvious potential for digitisation (content, information, transactions), but has expanded to include all vertical industries, even those that will never be fully digital. Indeed, innovation is becoming more “phygital”, i.e. combining digital improvements (data capture and processing) and physical environments to offer advanced automated solutions with remote control and even decision-making.

Phygital technologies, combining hardware and software, are already available and often quite mature (having been available for more than years technically), but their adoption has remained limited, often to niche B2B markets. The hardware aspects of these technologies imply more difficulties in providing scalable solutions across all vertical markets. As a result, attention in terms of technologies is being essentially given to software enablers and automation and hardware components.

Contrary to software, many of the hardware innovations are not fully mature and are therefore wild cards for the future (or even the future of the future). A hardware revolution is still uncertain, but could constitute a major game-changer with the advent of futuristic solutions like quantum computing, energy harvesting, brain reading devices or implantable technologies in human bodies.

Outside of these key domains, pure media (or at least display technologies) and telecom technologies have almost disappeared from top 15 rankings, illustrating the maturity of these industries where new technologies are seen mostly as incremental evolutions. Only 5G stands out here, with numerous prospects in terms of technology breakthroughs, including IoT and network slicing. As a reminder, almost 2 billion EUR are expected for European 5G investment in the next 5 years. With 5G, the telecom industry will go one step further towards the softwarisation that began with SDN/NFV and software-defined radio. With such developments on the horizon, who will benefit the most is still an open question.