Game of Thrones to receive BAFTA award for TV craft 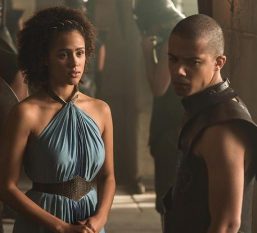 The British Academy of Film and Television Arts has announced that the production team from the popular fantasy-drama series Game of Thrones will be honoured with the BAFTA Special Award at this year’s British Academy Television Craft Awards.

The ceremony will take place on April 22nd at The Brewery, London and will be live streamed on YouTube and Twitter. The Special Award recognises the craft behind the making of the series and their outstanding contribution to revolutionising and pushing the boundaries within the various crafts involved in making all the 67 episodes to date.

The award also recognises the support the series has provided for the television industry in the UK. Game of Thrones has filmed across various locations in Northern Ireland, with a production HQ at Titanic Studios in Belfast which has been home to the series since the pilot.

Receiving the award on behalf of the entire production team will be the actors John Bradley (who plays Samwell Tarly) and Hannah Murray (Gilly).

Krishnendu Majumdar, Chair of BAFTA’s Television Committee, said: “This award recognises and celebrates the excellent craftsmanship of the entire production team behind Game of Thrones. The craft behind what is one of the most popular dramas of our time is nothing short of incredible, from the breath-taking location shots to the intricately designed costumes and set pieces, and not forgetting the level of detail from the makeup and prosthetics team to name a few. Huge congratulations to everyone involved.”

Speaking on behalf of the whole production team are executive producers D. B. Weiss and David Benioff. They said: “This award makes us extremely happy on behalf of the people who actually earned it – all our brilliant, talented, hard-working department heads and crew. Many, many people work insanely hard to create any film or television show. They are creators every bit as much as actors, writers, producers or directors, and deserve to be recognised as such.”

HBO’s Game of Thrones first broadcast in the US in 2011 and was acquired by Sky Atlantic for UK audiences in the same year. The drama, based on the bestselling fantasy books by George R.R. Martin, was created by David Benioff and D. B. Weiss.

The final season of the show will air next year.