Does the recent recognition for Netflix in the Emmy nominations reflect the content that American audiences actually care about? Parrot Analytics investigated US audience network demand, and compared this to the number of Emmy nominations received per network, to see if the hype is justified. 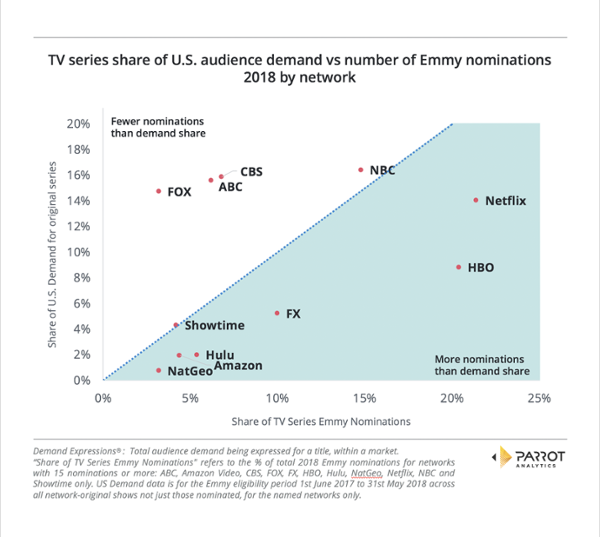 The blue line marks where a network would be if the network’s demand share and nomination share are the same. With 4.3 per cent of the US demand from of the 11 networks and 4.2 per cent of the Emmy nominations, Showtime is performing almost exactly as would be expected if the Emmys nominations were based solely on US audience popularity.

However, popularity is not the criteria that decides how nominations are given out, these are instead given out for artistic merit and talent. And yet by taking a measure of popularity instead, HBO is still the top-performing network, with an 8.9 per cent US demand share and a huge 20.4 per cent Emmy nomination share, which equates to a difference of +11.5 per cent (over-performing).

None of the other over-performing networks come close to these numbers, although FX in third has a very respectable difference of 4.8 per cent between its US demand and nomination share. Continuing, Hulu achieved 3.4 per cent while both Amazon Video and National Geographic over-performed by 2.4 per cent.

While of course the networks that over-performed should be applauded for the effort it takes to punch above their weight like this, there is a common factor in the networks to the left of the blue dotted line: All of the networks that are substantially under-performing in their nomination share against their audience demand share are broadcast networks.

NBC has 1.6 per cent fewer awards than would be expected by popularity, CBS has 9.1 per cent fewer, ABC 9.4 per cent and FOX 11.6 per cent. Further, the evaluation did not even include the fifth broadcast network The CW, as despite the airing of critically acclaimed shows like Jane The Virgin and Crazy Ex-Girlfriend, that network did not achieve the evaluation threshold of 15 nominations.

– Parrot Analytics’ analysis demonstrates that there is a large data spread that exists when network/platform popularity is correlated with the number of nominations received.

– On the one hand, Netflix should have received even more nominations given the popularity of their original shows. And in turn, this means that HBO is actually the #1 best-performing network overall, with 11.5 per cent more nominations received than what would have been expected, based on their average US platform demand over the Emmys eligibility period.

– And on the other hand, the findings show that the Television Academy does not appear to be recognising the US broadcast networks FOX, ABC and CBS as much as would be expected, given the high level of US audience share these networks command with their original content.