Bodyguard is BBC iPlayer’s biggest show of the year (so far). The first episode has broken records to reach 10.5 million requests – making it the most popular episode ever on BBC iPlayer.

Every episode of the Golden Globe-nominated drama – which stars Richard Madden as personal protection officer to Keeley Hawes’ home secretary – made it into BBC iPlayer’s top ten episodes of the year, receiving 41.3 million requests and becoming BBC iPlayer’s biggest box set ever.

The other big success story of the year is Killing Eve, the spy thriller from Phoebe Waller-Bridge, starring Sandra Oh, who’s up for best actress for the series at the upcoming Golden Globes, and Jodie Comer in a star-making turn as assassin Villanelle. The first episode of the series is the second-best performing BBC iPlayer episode ever, with 8.9 million requests, and the series overall has 40.7 million requests – the second biggest box set iPlayer has ever seen.

The two shows make up every episode of the top ten episodes of the year so far: 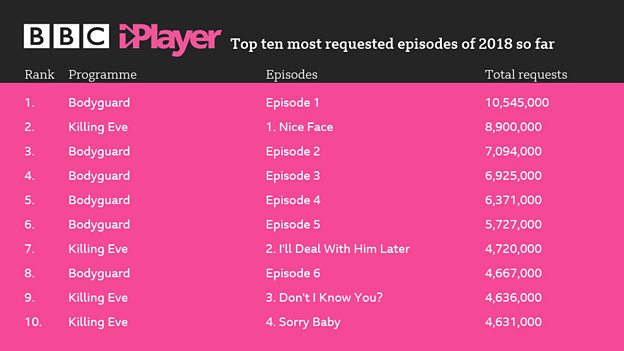 The latest performance data reveals that November was a big month for BBC iPlayer, with 311 million requests for the month, an 8 per cent increase on the same month last year.

Dynasties first episode, Chimpanzee, was the most popular programme of the month, with 2.3 million requests, followed by the airline advertising episode of The Apprentice with 1.8 million requests and The Little Drummer Girl with 1.7 million requests.

Charlotte Moore, director of content, BBC said: “These figures show that the BBC iPlayer remains the first choice for thrilling dramas, big sporting moments and the very best natural history and factual programmes. This year’s figures are the best yet and show that the BBC iPlayer is going from strength to strength. With Les Misérables, The Greatest Dancer and a new series of Fleabag coming up in the new year there will be more great programmes for audiences to enjoy in 2019.”

Dan McGolpin, controller of programming for the BBC, added: “It’s been a fantastic year for BBC iPlayer, driven by an array of top quality programmes. Bodyguard set a new high with over 10 million requests for its first episode alone. Millions of viewers binge-watched Killing Eve with the full series made available from the start. Keeping Faith was a sleeper hit from BBC Wales and Doctor Who returned with higher numbers of iPlayer viewers than ever before. A selection of BBC box sets were made available on demand including much-loved comedy series and thought-provoking documentaries. The bar for live viewing also went up with over 3 million people choosing iPlayer as the place to watch England beat Sweden in the 2018 World Cup quarter-final. This unique range is what viewers love about iPlayer.”