Eurosport, the Europe sports broadcaster, is celebrating the 30th anniversary of its launch and first ever transmission.

To commemorate the milestone, Eurosport has launched a new brand identity celebrating the spirit and sports stars of 1989 across its Eurosport linear, digital and social platforms in the form of idents, pre-title sequences and promos. Eurosport has also commissioned several 1989-inspired short-format series – to air on all Eurosport platforms – showing some of the unique events and iconic sports stars that appeared on the channel in its inaugural year.

To amplify the landmark and further engage with its millions of fans across the continent, Eurosport has partnered with music streaming service Spotify, to launch a dedicated 1989-themed playlist, microsite and digital advertising campaign that will run from the February 5th to 28th.

On February 5th 1989, following a collaboration with the European Broadcast Union, the Eurosport channel was launched on Sky Television featuring a wide variety of sports content with commentaries in English, Dutch and German. During its first month on air, the channel broadcast key live sporting events, such as the World Alpine Skiing Championships, World Matchplay Snooker, the World Bobsleigh Championships and the European Figure Skating Championships.

Today, Eurosport is the Home of the Olympic Games in Europe, where it delivered the ultimate Games experience for PyeongChang 2018 with its award-winning coverage reaching both record linear and digital viewership across localised Eurosport services. Eurosport is also firmly established as the home of cycling, Grand Slam tennis and winter sports, with its channels reaching 246 million cumulative subscribers across 75 countries in Europe, Asia Pacific, Africa and the Middle East.

JB Perrette, President and CEO Discovery International, said: “Eurosport has been dedicated to sport for 30 years and continues to innovate and disrupt the market – proving itself to be a pioneer of the sports industry time and again. We are incredibly proud of what this company has achieved, and it is a testament to the vision, dedication and commitment of an incredible team over the years that Eurosport continues to grow and is now reaching more people on more screens than ever before. From our game-changing Olympic Games partnership; position as the home of cycling, Grand Slam tennis and winter sports; and operator of the only European-wide OTT streaming service – the Eurosport Player – Eurosport continues to be a unique proposition for sports fans across the continent. With our second Olympic Games fast approaching, the continued development of our digital products, further investment in technology and ongoing ambition to strengthen our rights portfolio, Eurosport will be powering people’s passions for years to come.” 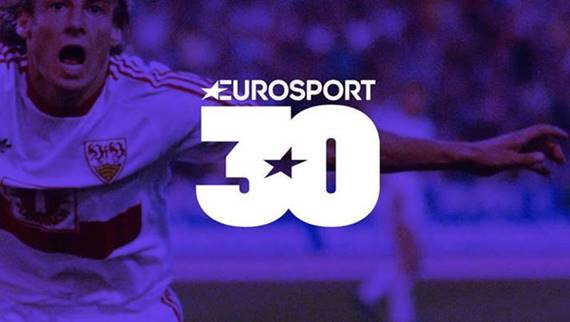 George Aivazoglou, Vice President of Marketing at Eurosport, added: “Over the past 30 years, Eurosport has developed an enviable position as one of the most recognisable sports brands worldwide. Like many of the athletes we showcase each and every day, our company has spent many years honing its craft, continuing to innovate, determined to super-serve passionate communities of fans in Europe and around the world. The 30th anniversary brand identity is a celebration of our heritage, focusing on the sports stars and spirit of 1989 to engage the current-day viewer across all platforms.”

Additionally, the Eurosport Player, launched in 2008 and still the only Europe-wide OTT sport streaming service, and Eurosport app have experienced record subscriber growth over the past 12 months.