A research study conducted by Texas Tech University has revealed that YouTube is the biggest culprit in the rise of “Flat Earthers” – a growing community of people who worryingly believe that the Earth is flat.

The researchers interviewed 30 attendees at a Flat Earthers annual conference in North Carolina, US – and all but one suggested they bought into the theory as a result of watching YouTube videos on the subject.

“The only person who didn’t say this was there with his daughter and his son-in-law and they had seen it on YouTube and told him about it,” said Asheley Landrum, who led the research.

The interviews revealed that most had been watching videos about other conspiracies, with alternative takes on 9/11 and the moon landing among others, when YouTube offered up Flat Earth videos for them to watch next.  Some said they watched the videos only in order to debunk them but soon found themselves won over by the material. 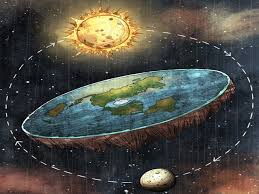 “There’s a lot of helpful information on YouTube but also a lot of misinformation,” Landrum said, commenting on the research findings. “Their algorithms make it easy to end up going down the rabbit hole, by presenting information to people who are going to be more susceptible to it.”

“Believing the Earth is flat in of itself is not necessarily harmful, but it comes packaged with a distrust in institutions and authority more generally,” she added. “We want people to be critical consumers of the information they are given, but there is a balance to be had.”

Landrum called on scientists and others to create their own YouTube videos to combat the proliferation of conspiracy videos. “We don’t want YouTube to be full of videos saying here are all these reasons the Earth is flat. We need other videos saying here’s why those reasons aren’t real and here’s a bunch of ways you can research it for yourself.”

“There’s always going to be a small percentage of people who will reject anything that scientists put out there but maybe there’s a group in the middle that won’t,” she concluded. “The only tool we have to battle misinformation is to try and overwhelm it with better information.”