Confirming earlier rumours, the BBC and ITV have revealed they are in the concluding phase of talks to establish a strategic partnership to bring what they describe as “an exciting new streaming service” to UK audiences. Any content made exclusively available on the platform that was previously available on existing SVoD platforms will put the operation in competition with services such as Netflix and Amazon Prime Video.

The pair have agreed a joint vision for the service, to be called BritBox, and are now working on a formal legal agreement. The BBC and ITV anticipate that other partners will be added to BritBox and both will speak to regulators and the wider industry about their proposals.

BritBox would be an original streaming service providing what they say is “an unrivalled collection” of British boxsets and original series, on demand, all in one place and would provide: 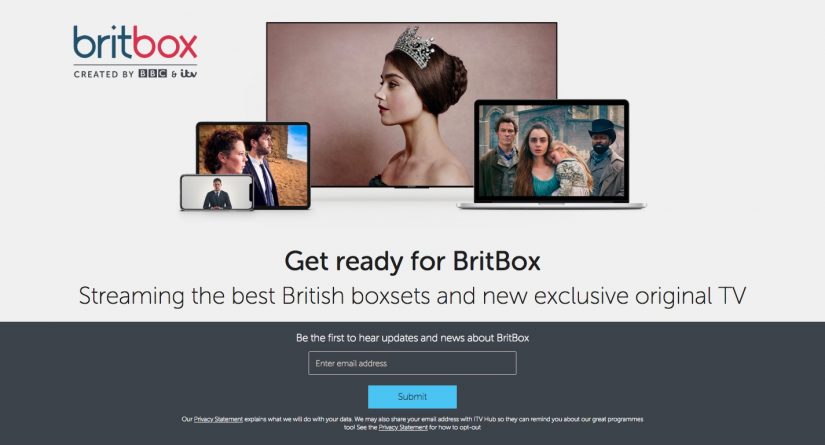 “I am really pleased that ITV and the BBC are at the concluding stage of discussions to launch a new streaming service,” declared Carolyn McCall, CEO of ITV. “BritBox will be the home for the best of British creativity – celebrating the best of the past, the best of today and investing in new British originated content in the future.”

“I am delighted that the BBC and ITV are working together on something truly special – BritBox,” added BBC Director General, Tony Hall. “A new streaming service delivering the best home grown content to the public who love it best. The service will have everything from old favourites to recent shows and brand new commissions.  It’s an exciting time for the viewing public.”

Both organisations say they are “delighted” with the success of their BritBox SVoD service in North America which is ahead of expectations having already broken through targets with over half a million subscribers.

According to the pair, this success shows the BBC and ITV have the knowhow to launch and manage a streaming service and research with the British public shows that there is a real appetite for a new British streaming service – in addition to their current subscriptions.

The aim is to launch the service in the second half of 2019.  While neither the BBC or ITV can confirm pricing at this stage, they suggest it will be “competitive”.

The BBC and ITV will provide a further update when a formal agreement is reached.

TMT analyst Paolo Pescatore described the move as “long overdue”, but a step in the right direction, warning, however, that it might be a bit late. “Pulling content off the established SVoD providers will help differentiate its own offering, but it doesn’t guarantee success,” he warned.

“The biggest challenge is to get consumers to part with their hard earned cash for another service,” he advised, suggesting that the providers should partner with telcos and focus on what they do best; creating the next biggest show.

Steve Miller-Jones, Senior Director at CDN provider Limelight Networks, offered his thoughts on the service, commenting: “The planned BritBox service could become an OTT powerhouse with true punch given the combination of the rich content libraries and iconic brands of the BBC and ITV. Nonetheless, the market is hyper-competitive and the success of this venture will depend on delivering a superior quality of experience from day one. Low quality, interruptions or hard to find content would damage the BritBox ambitions at an early stage, when other equally strong content brands like Disney are also competing for consumer subscriptions with their own new services and strong content catalogues.”

News of the tie-up broke as many in the UK broadcast, production and media tech sector were heading to trade show BVE in London. Advanced Television caught up with a number of executives keen to share their views on the development.

“The creative industry contributed close to £92 billion to the UK’s economy in 2016, growing at twice the rate of the UK economy and it needs to stay alive,” commented Terry Washington, BVE Event Director. “In an age of digital and political disruption, it’s now time for the UK creative industry to come together and BritBox is a prime example of strategic partnering to bring an exciting new streaming service to UK audiences. It promises to bring a transformational SVoD service that celebrates the best of British content and plays to the demands of audiences in a market where streaming subscribers are growing at a rapid rate. The industry should continue to future-proof, protect and drive forward Britain’s unique TV and film ecology which contributes so much to our economy and culture.”

“I was really excited to hear the news about the announcement of BBC and ITV teaming up to launch Netflix rival ‘BritBox’,” admitted Oliver Kadel, Co-Founder & Audio Lead at 1.618 Digital. “The film industry is in very good health at the moment and the timing couldn’t be better for such an initiative. The UK has a great heritage in fictional and documentary film making and there is no shortage of local talent working in the industry delivering top class content. Depending on the scale of this ambition we can certainly expect a boost to the economy in this sector, which can only be good news for local businesses and suppliers.”