Syfy, the multiplatform, science-fiction focused media brand, has announced it will launch its VR science fiction experience, Eleven Eleven, in May in collaboration with NBCUniversal Networks (NBCUIN) who are leading the project.

Produced in association with Digital Domain – the Academy Award-winning visual effects studio – Eleven Eleven will launch with three custom experiences designed for: tethered VR headsets, mobile VR headsets and AR devices. And, in Sky territories, Sky VR will partner with SYFY on the release of Eleven Eleven, making a version of the experience available through Sky VR on applicable platforms.

This project is influenced by immersive theatre, using storytelling techniques that enable users to view the action from multiple perspectives. Set on an island planet, users are placed at the centre of the action as characters count down the final 11 minutes and 11 seconds to an extinction-level event. Users have the ability to control their experience by following a group of interconnected characters and their stories, with over 90 minutes of content to explore.

“With Eleven Eleven, we are pioneering an innovative scripted format for science fiction content that blends the best of theatre, gaming and cinema to create unique VR and AR experiences,” said Steve Patscheck, EVP Global Programming, NBCUniversal International Networks. “By creating an original piece of IP, Syfy was able to design specifically for VR and AR, all the while exploring how immersive technologies could heighten the thrill of storytelling.”

Neil Graham, Executive Producer, Sky VR Studios, added: “We’re delighted to be partnering with Syfy and NBCUniversal International Networks on Eleven Eleven. It is a truly innovative VR experience and a brilliant step forward in our growing range of VR content.” 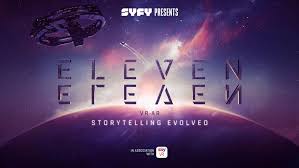 The production incorporates the unique feature of a spatial score, which attaches individual soundtracks to each character that change dynamically, based on the user’s position. The original music from Bleeding Fingers – a custom score production company co-founded by Han Zimmer – was composed and integrated so that each character’s distinctive score interlinks seamlessly with the others, as the user navigates between stories.

The original science fiction story  has been selected by the 2019 SXSW Film Festival, where it will have its world premiere as part of the festival’s Virtual Cinema stream later this month.