Over the past few years, online video services in Europe have experienced rapid growth, particularly those that follow the subscription revenue model. Global players such as Netflix, Amazon and HBO went direct-to-consumer, disrupting the previous long-term relationship between subscribers and multichannel operators.

Soon after Netflix began showing signs of success in North America and Western Europe, pan-European satellite operator Sky launched its own stand-alone online video service in the UK, combining on-demand content with live streaming TV networks in 2012. Others followed, such as Canal+ with Canalplay in France and Telecom Italia with TIMVision in Italy.

Currently, five services accounted for 89 per cent of the $6 billion in consumer spending attributed to subscription online video services, according to a report published by Kagan, a media research group within S&P Global Market Intelligence.

Netflix is by far the outright leader, taking 52 per cent of all European streaming revenues. Amazon comes in second, with its Prime Video service taking 21 per cent. The rest can be seen in the chart below. 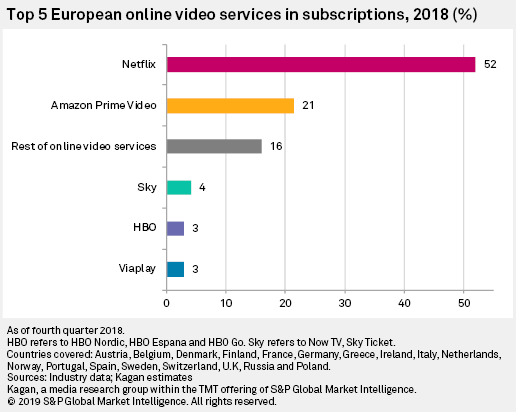