Bezos told delegates at Washington Convention Center that his team had been working on the vehicle for 3 years and, like his low-cost reusable rockets, would herald a new era for space. “This is an incredible vehicle that is going to the Moon. People are very excited to soft land their cargo on the moon in a way you can’t today,” he said, stressing the reduction of the cost of getting into space.

“It is time to go back to the Moon, but this time to stay,” Bezos added. “This is a multi-generational vision. We need to inspire future generations.” He said he wanted to see humans on the Moon by 2024. 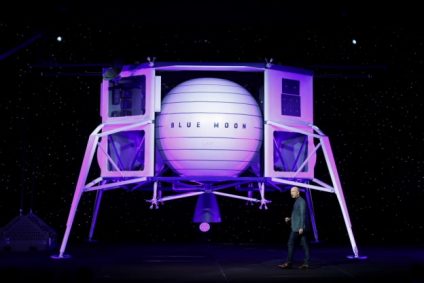 The lander could carry up to 3.6 tonnes of cargo to the Moon, helped by an all-new rocket engine (the BE-7), although with “stretched” propellent tanks the cargo limit would rise to about 6.5 tonnes.

Bezos told delegates that he was personally funding the development of the concept to the tune of $1 billion a year.

Bezos already has a series of Blue Origin-based rockets for launching satellites – and humans – into space.  Their low-cost echoes the concepts from SpaceX which are all recoverable.