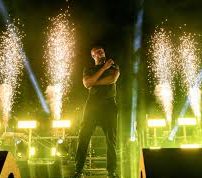 EE lit up London’s iconic River Thames in celebration of the launch of the UK’s first 5G network. The mobile network marked the occasion by hosting a 5G-powered gig with UK grime artist, Stormzy, set against the backdrop of Tower Bridge.

People in attendance and those tuning in online saw history in the making as the Glastonbury 2019 headliner’s performance became the first event of its kind to be live streamed over EE’s new 5G network, which was hosted by Radio DJ, Clara Amfo.

To accompany the show, a 5G-powered performance was created in collaboration with Stormzy to celebrate the six cities that EE has connected with 5G. Over 200 state-of-the-art LED lights were affixed to the stage, with beams of light projected 1,000ft in front of the Tower Bridge. The 5G-powered display, which was connected via EE’s 5G network, supported the powerful lyrics and music of Stomzy’s bespoke set.

Fans in each of the other five launch cities were treated to the best seat in the house via a 360-degree VR experience at stores in Cardiff, Edinburgh, Belfast, Birmingham and Manchester. Guests attending the in-store events were invited to use VR headsets to watch the performance in 360 degrees from the front row, just metres away from where Stormzy was performing on the floating stage in London.

Stormzy commentsed: “Big up EE, thank you for letting me launch your 5G network in the UK. Tonight was sick, I’m honoured to be part of history.”

Marc Allera, CEO of BT’s Consumer business, added: “We wanted to mark the arrival of the UK’s first 5G network with something spectacular. Tonight, we made history, not only by becoming the first network to launch 5G in the UK – but also using 5G to live stream this event to thousands of fans across the UK. Stormzy lit up the Thames and his fans’ faces with the energy, passion and charisma that he always brings to his live shows.”

From today (May 30th), the UK will be able to discover 5G. The 5G network is built on top of EE’s award winning 4G network – customers will connect to both 4G and 5G at the same time to get the best possible experience, even in the most crowded areas.

EE says it is launching 5G in the busiest parts of the UK, where 5G can really make a difference by providing a more reliable data connection to businesses and consumers. EE expects customers to experience an increase in speeds of around 100-150Mbps even in the busiest areas. Some customers will break the one gigabit-per-second milestone on their 5G smartphones. The fastest speed possible when EE launched 4G in 2012 was just 50Mbps.

EE has launched new 5G plans with Swappable Benefits for customers. All 5G customers will get two Swappables from a choice of five – including the BT Sport App HD HDR access for the best possible video quality, Gamer’s Data Pass, Music Data Pass, EE Video Data Pass, and Roam Further Pass – which they can swap in or out anytime they want. Customers taking the 120GB plan will get three Swappables, worth up to £33.99 per month.

In addition to the six launch cities, in 2019 EE will also be introducing 5G across the busiest parts of Bristol, Coventry, Glasgow, Hull, Leeds, Leicester, Liverpool, Newcastle, Nottingham and Sheffield. And in 2020, ten more towns and cities will get 5G sites: Aberdeen, Bournemouth, Brighton, Cambridge, Dundee, Exeter, Ipswich, Norwich, Plymouth and York.