SpaceX has had something of a maritime fleet from its beginnings. Its ‘Of course I still love you’ floating barge has been the landing stage for many of SpaceX flights. The second floating barge, with the giant text message saying “Just read the instructions” does a similar job usually on the Pacific.

Elon Musk’s team also had a vessel that was deliberately equipped to recover the expensive rocket fairings by means of a giant net. The vessel was called ‘Mr Steven’ and it operated on both the Atlantic and Pacific, shuttling through the Panama Canal like a ferry boat!

Musk renamed GO Mr Steven, and he – because all ships are ‘she’ – became GO Ms Tree. Then along came another vessel, named Ms Chief.

These names are reportedly drawn from Ms Tree sounding like Mystery, and Ms Chief sounding like Mischief.  The ‘GO’ element is because the vessels were sourced from Guice Offshore.

Their role is to – together with a mini fleet of other recovery vessels: to catch, or recover, rocket fairings that are valued at some $5-$6 million for each pair.

Each fairing is equipped with small thrusters which help guide them to the target ocean ‘landing’ area. The fairings also each have a parachute to slow their fall, and aid a successful capture. 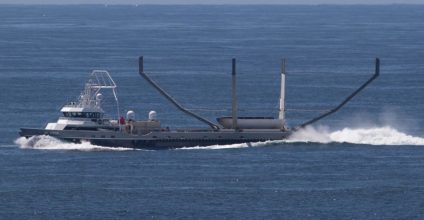 The math for SpaceX is straightforward. Even if the two ships cost – say – $10 million each, then that $20 million invested would be recovered in 4-5 successful ‘captures’ and offset the building of new fairings. Subsequent captures would be highly profitable. Even if the vessels cost twice as much the profit kicks in at about 10 captures.

Elon Musk needs to see plenty of success in these fairing capture tasks – as well as the floating drone vessels – when he starts launching his extensive ‘Starlink’ multiple satellite launches.