Thaicom has announced the signature of an Agreement of Intention with Russian Satellite Communications Company (RSCC), the Russian satellite operator, to collaborate on the joint development of a service offering for maritime satellite broadband connectivity. 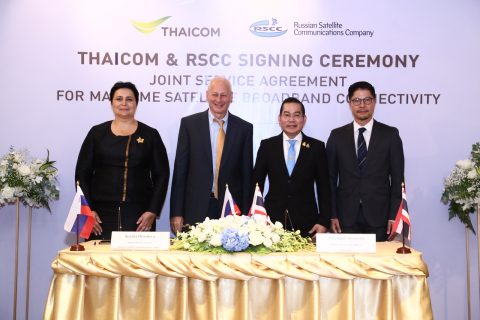 According to the framework of the agreement, Thaicom and RSCC will initially study roaming options on their proprietary maritime VSAT networks. Roaming on Thaicom’s network will be provided by Nava Roaming Solutions. Nava is Thaicom’s new maritime broadband service platform, addressing the need of ship and offshore operators for fast, reliable, and secure satellite-enabled broadband connectivity and managed services. RSCC maritime VSAT network is the largest satellite broadband network in Russia connecting more than 300 maritime vessels operating in the waters surrounding Russia and Europe.

Patompob Suwansiri, Chief Commercial Officer Thaicom, commented: “We intend the agreement to mark the beginning of a successful, long-term partnership between Thaicom and RSCC and the development of joint communication solutions connecting Russia with Asia-Pacific . This collaboration will leverage the capab ilities of Thai and Russian marine VSAT netwo rks. The Nava roaming solutions enabled satellite network will provide seamless switching of onboard equipment from one satellite network to the other without degradation of service level agreements provided . Customers will benefit from full high speed broadband coverage of maritime vessel routes between Europe and Asia-Pacific.”