Michael Hutchence, the charismatic frontman of rock group INXS, died in November 1997 but has remained the subject of a number of films and documentaries. Now a July 1991 Wembley concert, filmed and released on VHS a few months after the concert took place, is being converted to 4K.

Peter Wilson, CEO of Eagle Rock Films (a subsidiary of Universal Music), told delegates to MIPCOM that the original 35mm films (the concert was captured by 16 film cameras) had recently been discovered in garage in Sydney, Australia, thus enabling the restoration of a classic concert into a new release ‘INXS: Live Baby Live at Wembley Stadium’.

The new film is in widescreen and Wilson explained that it required a frame-by-frame examination, and includes one track that was omitted from the original video-cassette release (Lately). He pointed out one highly remarkable/obvious fact – that nobody in the crowd of 73,791 fans could have been using a phone to capture the concert. 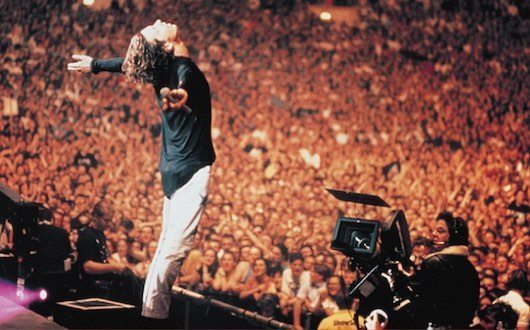 The audio tracks from the concert were remixed by Giles Martin (son of legendary music producer George Martin). The movie will be released globally in cinemas throughout November and December. A 4K Blu-ray version is also being released as well as conventional DVD and CD transfers.

Eagle Rock is looking at other classic concerts including early events from The Rolling Stones. The company is also in the process of re-scanning a Queen concert filmed in Montreal and which will be released for giant screen viewing.