Ross thanks Crunchyroll for bringing anime to UK

Jonathan Ross took to the Centre Stage at MCM Comic Con in London to introduce the UK premieres of two new anime series – In/Spectre and Somali and the Forest Spirit.

Both titles will be available exclusively on the Crunchyroll anime streaming platform early in 2020.

“I want to encourage more people to give anime a go,” remarked Ross (admitting that he was probably preaching to the wrong kind of audience). “It’s not just school girls with blades – although we do like that – and it’s not just demons,” he commented, adding that anime offers so much more in the way of romance, adventure, imagination and scope.

Speaking on the Comic Con experience, Ross said: “I love Comic Con conventions anyway, and I love fantasy conventions, because you do feel that if you’ve been a fan of something your whole life then you feel hope, because you are surrounded by people who – like you – were once considered losers and now we no longer care what anyone else thinks, you know, because we’ve got each other. So I love being in these kinds of spots and I love seeing all the cosplay, but I also love seeing all the upcoming ideas and the new TV shows that are coming, the new movies, new comics […] so I’m just always very happy when I’m at somewhere like this.”

Ross said he had only seen trailers for the shows he was there to introduce (“they haven’t even let me see them in advance”) but expressed his gratitude to Crunchyroll for making them available to UK audiences. 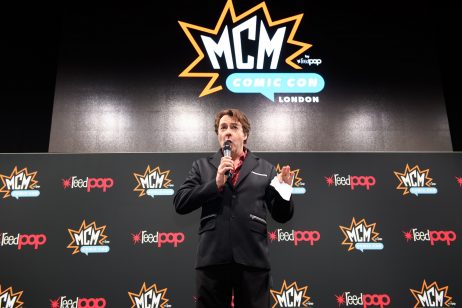 “Let’s give a big thanks to Crunchyroll for being there for anime fans,” he wrapped up.