The stars of new DC Comics TV series Pennyworth took to the Centre Stage at MCM Comic Con as fans were treated to a screening of the pilot episode.

The series has been acquired by SVoD service StarzPlay, who will stream the show in the UK, Germany, Italy, Spain, Ireland, Belgium, Luxembourg, Austria and Latin America.

The Batman prequel series stars Jack Bannon as a young Alfred Pennyworth – the man who later in life will become the loyal butler to an orphaned Bruce Wayne. Bannon was joined on stage by co-stars Paloma Faith and Ben Aldridge, as well as producer Bruno Heller.

Heller explained that when working within the DC canon, it’s “hard to find stories that haven’t been dug over before”, and that it was actually actor Michael Caine (who himself played Alfred in the Christopher Nolas Dark Knight movies) who initially suggested that Alfred’s SAS past had potential for “a wonderful origin story”. And thus they ran with that ball. 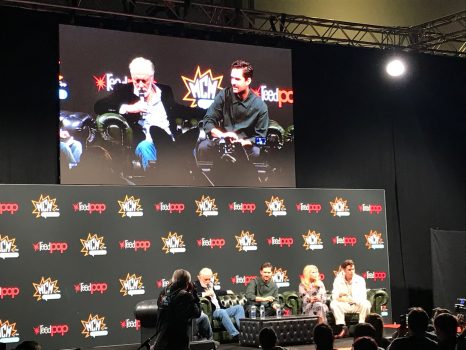 Heller added that the untold story gave them a “free hand in terms of creatvity, as the story hasn’t been explored before in [the Batman canon]”.

Unlike previous Batman tales, the series takes place in London, and not the fictional city of Gotham. Heller said the series is a “mish-mash” of a period drama and an alternative reality. So whereas the show features an episode that references the very real persona of Jack The Ripper, there’s also an episode that features an appearance by the very very fictional character of Dr Jekyll.

Bannon admitted that he looked to Caine’s portrayal of Pennyworth as inspiration for his own take on the character. As well as Caine being his favourite previous Alfred, he said: “being set in the 60s, it felt right to channel Michael Caine” he said.

The series also provides a rare outing for Thomas Wayne – father of Bruce – who seldomly gets to be appear in DC content on account of being dead(!). In Pennyworth the character is portrayed by Aldridge, who commented: “It’s exciting to flesh out [Thomas Wayne]… He’s slippery and a little bit annoying, and very dramatic and tense in every scene that he’s in.”

Faith plays an original character and the main villain in the show, but explained she doesn’t necessarily perceive her character, Bet Sykes, as a straight-up villains. “I get quite upset when people call her the villain,” she said. “There’s a thin line between villains and heroes in the DC Universe, and I think that’s the reality in life as well […] she kills people she as her job, and so she’s very desensitised about it […] She sees it as her work, so personally I feel a lot of empathy for her.”

All 10 episodes are now available on StarzPlay, with the service available on the Apple TV app, Prime Video Channels and Virgin Media.