Simon Pegg took to The Main Stage at MCM Comic Con to discuss past and future projects, and declared that “TV is a fertile playground” as he himself prepares to return to living room screens.

The British actor made a name for himself writing and starring in the celebrated Channel 4 sitcom Spaced (which turns 20 this year) before embarking on a Hollywood career which has seen him star in a number of blockbuster franchises including Star Wars, Mission Impossible and Star Trek – as well as his own ‘Cornetto’ trilogy.

But Pegg’s next project in the pipeline is Truth Seekers – a comedy horror series set to debut on Amazon Prime Video next year. The series will mark the first time Pegg and frequent on-screen acting partner Nick Frost have worked together on a TV show since Spaced – and Pegg said he is super excited about the prospect. “Nick is my best friend so whenever we get to work together it’s great,” he quipped.

Pegg added that he and Frost have set-up their own production company (Stolen Pictures, which launched in 2016) and, through that, the next few projects he’s working on are all TV-based.

Pegg said that “TV has changed so much since Spaced, and as screens have evolved we all have cinema screens in our homes now – our televisions are 16:9, the right ratio – so TV is no longer the poorer cousin of film. A lot of really exciting things are happening in television and a lot of great actors are finding the most interesting roles on TV… [TV has] become this incredibly fertile playground and I’m very excited to get back into it.” 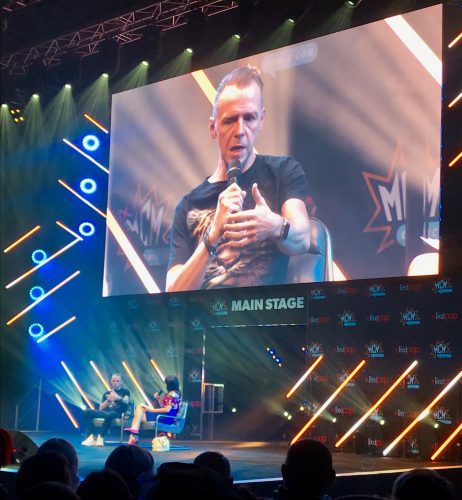 When asked why he thinks we’re currently seeing a wave of nostalgia in modern TV and movie projects – in the likes of Stranger Things, IT, Star Trek, Star Wars, Dark Crystal etc – Pegg said it’s mainly down to millennials:

“This generation is a generation of millennials […] anyone born after 1970 has had an extension of their youth, in that we haven’t been required to grow up as fast as we did back then […] I think all the kids that grew up buying Star Wars figures and being into all these properties like Marvel Comics, they’re all grown up and are having their say on what forms the cultural landscape. So they’re basically recreating their own childhood, and making that the mainstream. So I think the reason we’re seeing all these things coming back is because the people that are making it are the children of those shows and films.”