Research: Brits give up solo binging for multi-screening together 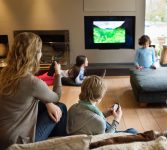 Family time as we once knew it is becoming more technical these days. Many families gather around the TV only to divide their time between multiple screens (vs just the one), according to a study conducted by internet TV service, netgem.tv.

With on-demand and personalised streaming content asserting dominance over the traditional TV packages, multi-screen viewing is on the rise with a quarter (26 per cent) of millennials admitting to streaming shows on separate devices whilst being in the living room with their family.

The research continues to show that half of Brits also admit to having two or more screens on the go whilst watching TV with their families, showing the increase in new ways to consume content simultaneously.

With 84 per cent of British viewers declaring that their preferred way to view content is through their TVs, but not necessarily together, we continue to question whether the ‘Gogglebox‘ set-up still has appeal with British families.

The research not only highlighted the growing multi-screening trend, but it also brought to light the shift in behaviours and attitudes around household viewing habits, and whether activities such as watching TV together, is still popular and important to the modern day family dynamic.

Out of the 2,000 UK adults surveyed by netgem.tv, the following was revealed:

Sylvain Thevenot, Managing Director of netgem.tv, said: “We know that the desire for on-demand and a more personalised content experience is rapidly growing, particularly amongst the younger generations who are keen to digest as much of it as possible. Our latest research shows that as a result of the significant rise in ‘multi-screening’, there is a noticeable shift in mindset around consuming content as an individual vs together.

“We’re seeing that most people who watch their own content become irritated when interrupted. They don’t want to consume alone, but they also do not want to be disturbed, which shows an adjustment around how we view the idea of ‘watching TV It’s inevitable that the desire to view content when we want, at a time we want on our device of choice is only going to grow. However, a personalised experience, such as the kind netgem.tv offers, can also promote familial camaraderie. Dinner table discussions around who’s watching what and which shows and movies are worth checking out are still as popular as ever.”

netgem.tv is the UK’s first personalised streaming service to bring together the UK’s most popular streaming services such as Amazon Prime Video, Rakuten TV, Hayu and YouTube Video, alongside Freeview Play (all the live TV and catch-up players from BBC iPlayer, All4, ITV Hub…). 50,000+ hours of content available, in one place.

The app allows your phone to be used as a TV guide and remote control with a personalised user interface which gives users access to plan their TV time in the palm of their hand. Users get recommended titles everyday that can be viewed across multiple devices, meaning that endless irrelevant content browsing is kept to a minimum with the all-in-one app.