The slowest broadband in the UK, with an average download speed of 0.22Mbps, is found in Kingsclere, Huntington in York, according to the latest consumer speed tests collated by uSwitch.com, the price comparison and switching service.

Kingsclere suffers average speeds a staggering 829 times slower than the UK’s fastest street, Darwin Street, Livingston in Scotland, where average speeds have reached 182.52Mbps over the past year.

According to the research, which is based on more than 122,845 ‘real world’ speed tests run by broadband users over the last year, a fifth (19 per cent) struggle with speeds of less than 10Mbps, while one in ten (9 per cent) crawl along at less than 5Mbps.

However, the number of broadband users enjoying faster speeds is growing. Nearly four in ten users (38 per cent) now get speeds of more than 30Mbps, up from less than a quarter (22 per cent) four years ago. But despite the fact that superfast broadband is now available to 95 per cent of the country, a recent uSwitch survey found that only six in ten Brits (61 per cent) believe they can access it in their local area.

In York, it’s a tale of two cities as residents in York Road, Elvington, enjoy ultrafast speeds of 135.56Mbps, while households just 16 minutes’ drive away in Kingsclere, Huntingdon, are enduring broadband that crawls along at just 0.22Mbps — more than 616 times slower.

Superfast fibre broadband is available on seven out of the ten slowest streets (70 per cent), suggesting that consumers are being deprived of a better service by a lack of awareness. 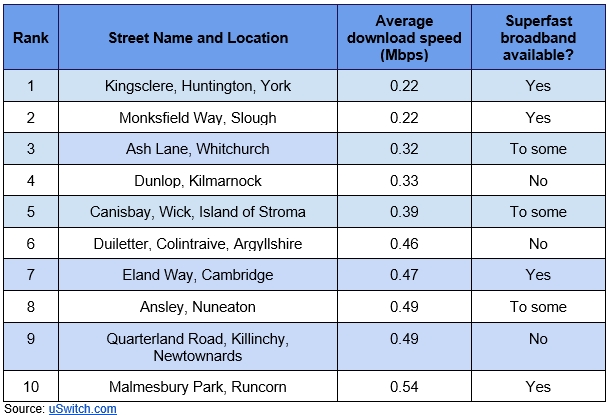 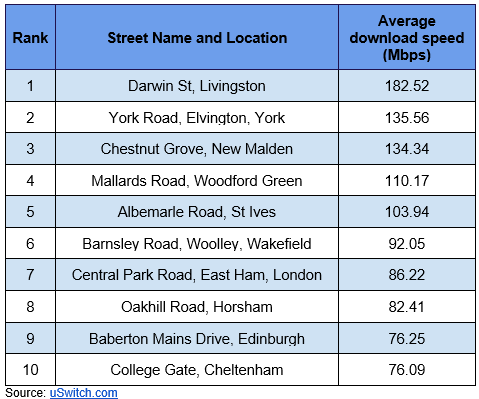 Dani Warner, broadband expert at uSwitch.com, says: “If Charles Dickens were writing A Tale Of Two Cities today, it could begin, ‘It was the best of broadband, it was the worst of broadband’. Our research reveals the digital divide running through Britain. Residents living on one side of a city can be struggling with broadband as slow as molasses, while people just miles away are enjoying ultrafast speeds.

“It’s ridiculous to think that it would take someone in York Road, Elvington less than seven minutes to download a two-hour HD film like Toy Story 4, yet it would take more than two and a half days for someone living less than 16 minutes’ drive away in Kingsclere, Huntington. Lack of awareness regarding superfast broadband is one of the biggest obstacles stopping people from getting faster download speeds. More than two-thirds of the slowest streets have access to superfast broadband, so we urge residents there — and anyone else unhappy with their broadband speeds — to visit uSwitch.com to see what speeds they could be getting,” concluded Warner.