A total of 21 movies will be available on the streaming service globally (excluding US, Canada, Japan), through distribution partner Wild Bunch International, as part of the company’s continued efforts to grow it library of animated films.  This expansive catalogue of Studio Ghibli films will be subtitled in 28 languages, and dubbed in up to 20 languages.

Toshio Suzuki, Producer at Studio Ghibli, said: “In this day and age, there are various great ways a film can reach audiences. We’ve listened to our fans and have made the definitive decision to stream our film catalogue. We hope people around the world will discover the world of Studio Ghibli through this experience”.

Vincent Maraval, Chief Executive Officer at Wild Bunch International, added “In finding the best digital partner for Studio Ghibli, our most valuable and faithful collaborators for 20 years, the Netflix team convinced us with their consistent love and energy for finding the best ways to promote the incredible and unique catalogue worldwide with respect to the Studio Ghibli philosophy”.

Aram Yacoubian, Director of Original Animation at Netflix, said:“This is a dream come true for Netflix and millions of our members. Studio Ghibli’s animated films are legendary and have enthralled fans around the world for over 35 years. We’re excited to make them available in more languages across Latin America, Europe, Africa and Asia – so that more people can enjoy this whimsical and wonderful world of animation.” 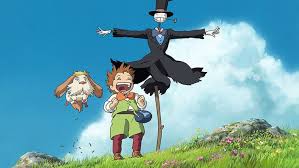 The 21 title will have a staggered release, with seven titles released on the first day of each calendar month for the next thress months as below:

HBO Max recently acquired the rights to the Studio Ghibli library for its soon to launch SVoD service in the US.