Virgin Media has called out BT’s “unsubstantiated” advertising with a  provocative stunt that it says “highlights the strength of Virgin Media’s network and its continued speed superiority over the UK’s telecoms incumbent”.

BT’s billboards, which are currently deployed in Bristol, claim that residents in the area shouldn’t “settle for Virgin”. Virgin Media has responded with its own mobile billboards in locations across Bristol proclaiming “B******T”, claiming that their ultrafast network passes more premises with faster speeds in the city and surrounding areas.

Virgin Media states its network covers almost 300,000 premises in Bristol with its top packages having an average speed of 516Mbps – which it claims are significantly faster than BT’s Ultrafast Fibre 250. 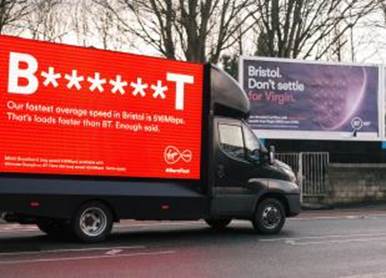 Cilesta Van Doorn, Brand and Marketing Director at Virgin Media said: “BT’s broadband bunkum just couldn’t go unchecked. Residents of Bristol won’t be fooled by BT’s babble and we look forward to welcoming anyone who wants to experience life in the fast lane with our superior ultrafast speeds. With a reliable future-proof network that is bringing gigabit speeds to Bristol and more of the UK, Virgin Media is, as always, leading the charge – catch us if you can.”

Virgin Media says it has formally challenged BT’s advert and has contacted the provider. BT has not yet responded.