Amazon Web Services (AWS) and the German Bundesliga will debut the first two Bundesliga Match Facts powered by AWS during tonight’s (May 26th) match featuring Borussia Dortmund vs. Bayern Muenchen on broadcast television in over 200 countries.

The two new statistics, Average Positions and Expected Goals (xGoals), will give fans deeper insights into a team’s intended playing style based on real-time analysis performed of data captured from tracking players’ locations on the field, and the probability of a player scoring a goal. Germany’s top national football league will leverage AWS’s unmatched set of cloud services, including machine learning and analytics, to introduce additional advanced statistics in 2020 and upcoming seasons.

Bundesliga Match Facts are generated by gathering data from the live game video feeds that are streamed into AWS for analysis, and then provided back to broadcast viewers around the world in real-time as statistics. These statistics aim to help audiences better understand things like the strategy involved in decision-making on the pitch and the probability of a goal for each shot. As of May 26th, Average Positions will be available during future broadcasts of Bundesliga matches, while xGoals will be available during highlight matches. 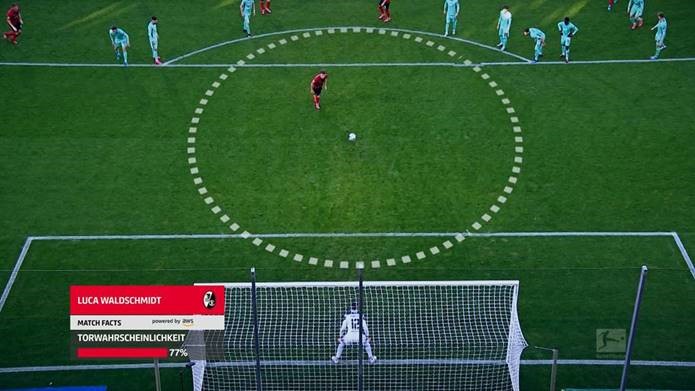 “We at Bundesliga are able to use this advanced technology from AWS, including statistics, analytics and machine learning, to interpret the data and deliver more in-depth insight and better understanding of the split-second decisions made on the pitch,” said Andreas Heyden, Executive Vice President of Digital Innovations for the DFL Group. “The use of Bundesliga Match Facts enables viewers to gain a deeper insight into the key decisions in each match.”

“AWS is helping the Bundesliga enhance the broadcast viewing experience by delivering deeper insights into the game that didn’t previously exist,” said Andy Isherwood, Vice President and Managing Director EMEA, AWS. “With AWS, Bundesliga is able to provide real-time statistics to predict future plays and outcomes. These two new statistics are just the beginning of what we’ll be able to deliver for football fans as we look forward to unlocking new ways to better educate, engage, and entertain viewers around the world.”