Sky Studios Elstree given go ahead

The development represents a significant investment in the UK and European creative economy and will be made with the backing of Sky’s owner Comcast and in partnership with sister-company NBCUniversal. Legal & General will be financing and developing the scheme, which is located in the borough of Hertsmere, north of London.

Work to clear the site ready for construction begins this month and will commence with strict safety and social distancing guidelines. 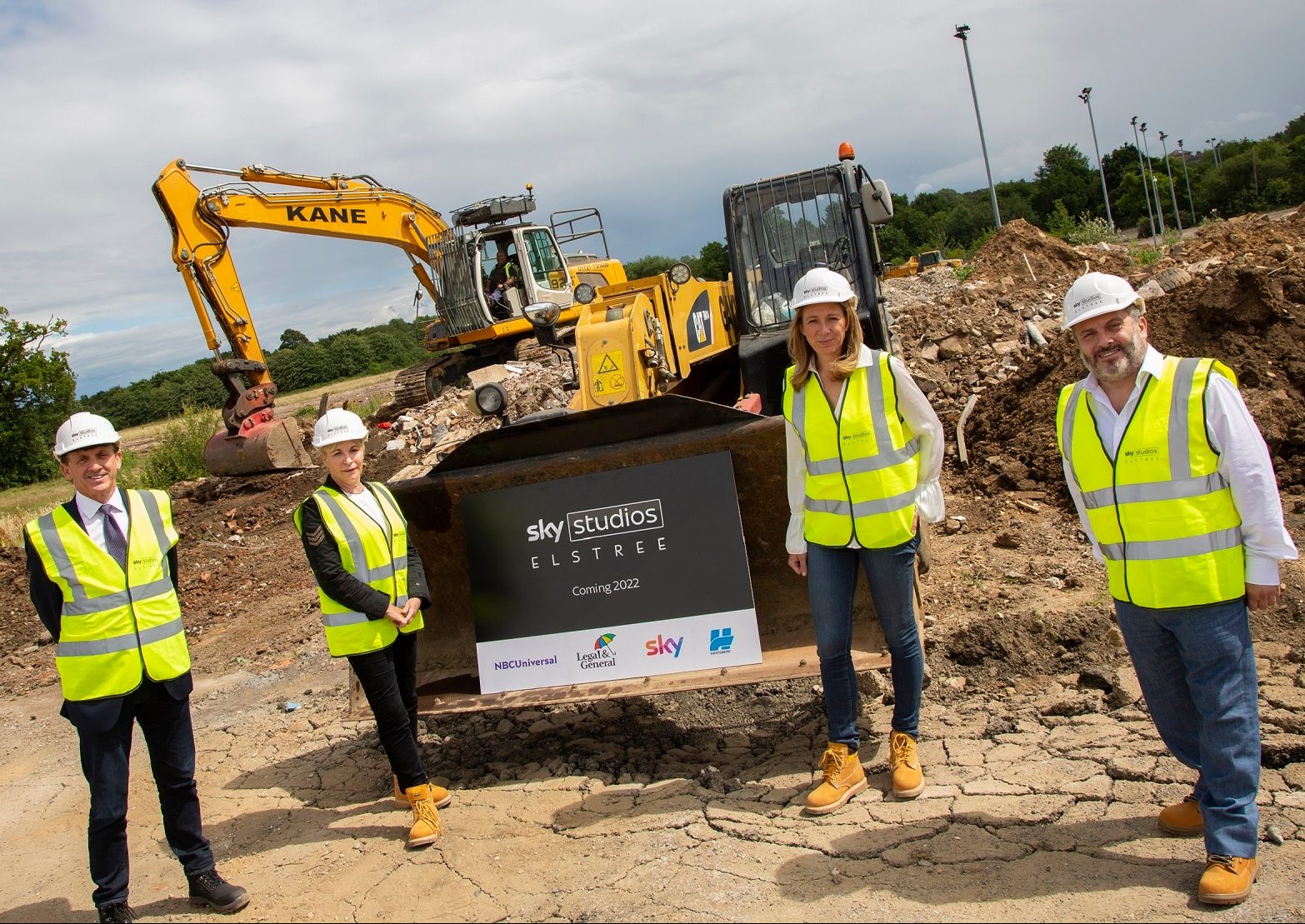 Over the first five years of operation, it is expected that Sky Studios Elstree will generate up to an additional £3 billion of production investment in the UK’s creative economy from Sky, NBCUniversal and other producers

The final design for Sky Studios Elstree sees 12 sound stages on site, with the ability to merge together and sub-divide multiple sound stages simultaneously, providing flexibility and scalability to accommodate productions of all sizes. This means that the biggest sound stages on site can now increase to cover 60,000 sqft if needed, or reduce to much smaller segregated studios, simultaneously providing Sky Studios and NBCUniversal a Covid-19-ready set up for the future. The production facilities and digital suites on site will also be set up to facilitate remote working.

Once operational, the scheme will provide much needed space for the ongoing boom in film and TV production in the UK – attracting the European and international creative community to do their best work in Britain. The total area of the site will cover the equivalent of 17 football pitches.

Sky Studios Elstree will lead to the creation of over 2,000 jobs in the local area, including 900 during the construction phase and 1,500 once the studio is operational. The full-time roles will include a significant number of production jobs alongside roles supporting the running of the studio’s operations. More broadly, thousands of additional new jobs will be supported in the national supply chain each year, with Sky Studios Elstree helping to fuel the local economy across Hertsmere.

Secretary of State for Culture and MP for Hertsmere, Rt Hon Oliver Dowden MP, said: “The film and TV industry plays a vital role in the UK’s economy, with its programming keeping us informed, entertained and connected over the past few months. Sky Studios Elstree will become home to the best-loved films and TV shows of the future, championing British creativity on the global stage. It will also bring investment, jobs and opportunities to people across Hertsmere – cementing Elstree & Borehamwood’s reputation as ‘The British Hollywood’.”

Cllr. Morris Bright MBE, Leader of Hertsmere Borough Council, said: “We have a long and illustrious reputation for film and television production in our borough. This exciting development means the creative industries will continue to thrive in Hertsmere. For local people, it means not just jobs – potentially 2,000 roles being created – but a major injection of skills and expertise, which we hope to harness through educational and training opportunities. And Sky Studios Elstree’s huge production spend will provide a massive boost to the local economy such as retail and leisure sectors and professional services at the heart of our communities in Hertsmere.

“Above all, this is a moment of huge pride for our residents and businesses. With the council-owned Elstree Studios, nearby BBC Elstree and now Sky Studios Elstree, this really does mean the return of the British Hollywood to our borough,” Bright added.

Caroline Cooper, Chief Financial Officer, Sky Studios, said: “Even during challenging economic times, Sky Studios Elstree represents Sky’s continued commitment to the UK’s cultural economy, as well as our goal to recruit, train and develop the leading creative talent of tomorrow.  Alongside our colleagues at NBCUniversal and our partners at Legal & General, we will create a world-leading production studio that will turbocharge Sky Studios’ plans to create even more award-winning Sky Originals for our customers.

Helen Parker, EVP of Universal Pictures Content Group, NBCUniversal added: “After years of producing great content in London, NBCUniversal is excited to have Sky Studios Elstree, our own production destination for our film and television studios – including Universal Pictures, Focus Features, Working Title, and Universal Studio Group – where we can fully embrace all that the flourishing UK creative industry offers. We look forward to continued collaboration with our colleagues at Sky Studios.”