Quibi recently informed subscribers in Australia and New Zealand of two significant changes to their service: not only would monthly subscription fees be reduced by 40 per cent, but a free ad-supported plan would be phased in over time. Both portend sweeping changes for major markets such as the US, according to a report from research consultancy TDG, a division of Screen Engine-ASI.

“It was inevitable that Quibi would make such moves,” argues Lauren Kozak, senior analyst and author of TDG’s new analysis. “The question is how much longer the company can wait before implementing similar changes in the US, especially as the pandemic extends into the fall and winter.”

Kozak evaluates a number of factors inhibiting demand for Quibi, chief among them a debilitating lack of interest in the service. According to April 2020 TDG research, only 10 per cent of US adults were at minimum moderately likely to sign up for Quibi at current price/ad levels. 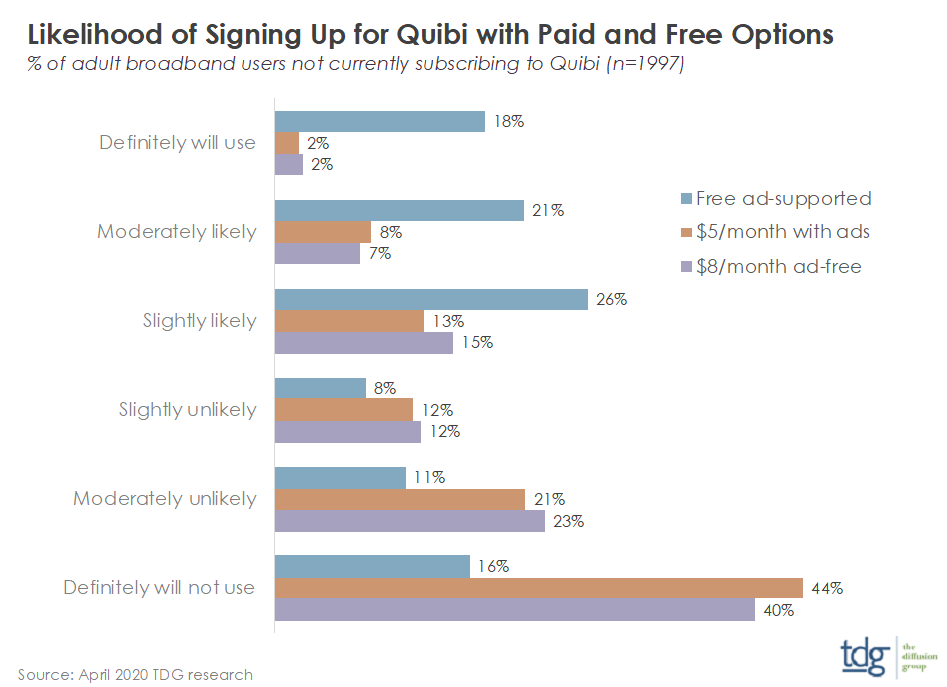 In an April 2020 survey, TDG asked adult broadband users how likely they would be to sign up for Quibi at $8/month ad-free and $5/month with ads, and to use if free with ads. While one would expect demand to incrementally improve as cost of service declines, this did not happen—at least in terms of non-zero costs. Top-2 scores of $8 vs. $5/month price points were 9 per cent and 10 per cent respectively, with bottom-2 scores of 63 per cent and 65 per cent respectively. At $5 or more per month, then, Quibi has little chance of success. (For comparison, pre-launch research on Disney+ at $6.99/month enjoyed top-2 scores of 43 per cent, with 18 per cent who would definitely sign up.)

However, if the service were free with ads, four-in-ten adult broadband users would watch, with 18 per cent certain to do so. Another 34 per cent are on the bubble, either slightly likely or unlikely to view. “Therein lies Quibi’s best chance to weather the pandemic, or to even build a userbase at all,” says Kozak.

“Social networks dominate short-form video viewing among young adults, capturing hundreds of millions of viewers. Yet none—including YouTube and Facebook—have been able to convince young adults to pay a fee each month to watch professional content.” Kozak notes that Quibi’s 5-10-minute format immediately cues viewers that the content should be free. “At this point in the evolution of mobile short-form video, and regardless of new features and formats, introducing a paywall is problematic.”