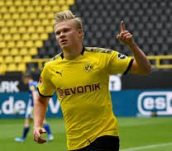 Digital media company OneFootball, Bundesliga International, a subsidiary of the DFL Deutsche Fußball Liga, and Sportfive have collectively launched an innovative broadcasting model for all Bundesliga and Bundesliga 2 matches in Brazil.

Beginning with the upcoming 2020-21 season, which kicks off on September 18th, all Bundesliga and Bundesliga 2 games will be broadcast for free in Brazil exclusively by OneFootball – for the next three seasons, up to and including the 2022-23 season. In addition, OneFootball will also broadcast the German Supercup, which this year features FC Bayern München and Borussia Dortmund, as well as the all-important promotion/relegation matches at the end of each season.

After future-driven discussions on how best to engage the Brazilian audience, OneFootball and Sportfive, as a global sports business agency and comprehensive rights partner of the DFL, have joined forces to create the overall framework for this distribution partnership. Sportfive and OneFootball will jointly oversee the marketing of all advertising inventory.

In addition to this agreement, Bundesliga International retains the option to make one match available to a linear broadcaster in Brazil each matchday.

Lucas von Cranach, CEO and founder of OneFootball, commented: “We continue to democratise football. Bringing freely available matches from one of the biggest leagues in the world to Brazil, where football is the most popular sport, is really exciting for us. By energizing the traditional sports media landscape and bringing the action directly to Brazilian fans, for free and easily available at their fingertips, we’re another step closer to becoming the ultimate football destination for a new generation.”

Robert Klein, CEO of Bundesliga International, added: “The Bundesliga has long been associated with driving innovation in football and this agreement with OneFootball, in collaboration with Sportfive reiterates our commitment to utilizing technology for the good of fans globally. There is a rich history which ties together German and Brazilian football and, through this partnership, we can ensure that Bundesliga remains an important part of the footballing culture. With the OneFootball app, the Bundesliga is freely available and with highly entertaining football, world class players and more goals per match than any other major European league, this partnership is another step we are taking to reach more fans throughout Brazil.”