As a tumultuous 2020 draws to a close, UK multiplay operator Virgin Media has revealed how the year’s events have accelerated broadband usage, shifted TV habits and reconnected loved ones.

In 2020, the nation consumed a record-breaking amount of data, tuned into more TV, and spent longer on the phone, based on new analysis of more than six million Virgin Media cable and mobile customers.

Customers downloaded an extra 2.8GB of data per day on average in 2020, and between them, burnt their way through 26,530 petabytes (26,530 million gigabytes) of data – in this record breaking year for broadband use. 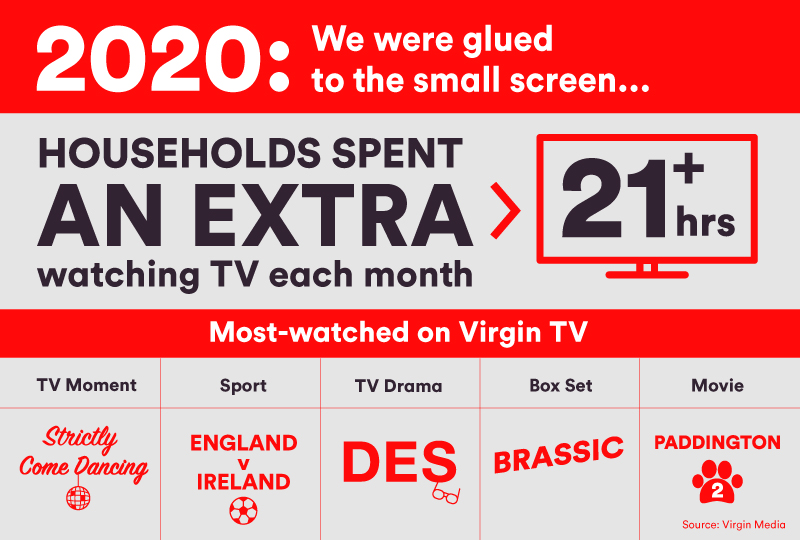 When it came to upload traffic, Virgin Media’s network saw data use jump up by 64 per cent across the year, driven by people working from home, connecting with loved ones on video calls and playing online video games.

The nation turned to the small screen, with households spending an extra 21 hours on average watching TV each month – equivalent of 10 full days per year and enough to watch all four series of The Crown six times over.

During a year that forced people to keep apart from friends and family, the length of an average mobile phone call shot up by 28 per cent, with Virgin Mobile customers collectively spending an extra 1,605 years on the phone compared to last year.

The same trend rang true for landline calls, with the amount of time spent on the traditional ‘home phone’ up by 21 per cent this year.

Despite people spending more time at home, mobile data usage increased by nearly a quarter (23 per cent) in 2020, with the biggest amount of data used on 11 December.

“After an extraordinary year, we’ve seen unprecedented demand for our services across the board; whether that’s broadband traffic, binge-worthy box sets or people picking up the phone to check in with friends and family,” reports Jeff Dodds, Chief Operating Officer at Virgin Media.

“The unexpected shift towards working, living, learning and socialising from home drove record-breaking traffic on our network and we provided a lifeline in lockdown.

“Staying connected, informed, and entertained is more important than ever, and despite the additional demand and challenges we’ve faced this year, our network has played a key role in keeping the country connected to the things and people that matter most,” he says.

November was a record-breaking month for broadband

While data use has been consistently high throughout 2020, the second national lockdown, the launch of two next-generation games consoles and the return of rugby with the Autumn Nations Cup meant Virgin Media saw its busiest month of broadband traffic on record in November.

During November, customers downloaded an average of 17.3GB per day – enough to stream six hours of HD TV, send and receive 900 emails, play three hours of online games, as well as spending hours browsing the web and social media channels – all in the space of 24 hours.

The busiest day ever was on Tuesday 10 November when a total of 108 Petabytes of data was consumed, linked to the launch of the Xbox Series X/S consoles and games including Assassin’s Creed Valhalla and Call of Duty: Black Ops Cold War.

In fact, outside of Covid-19, Call of Duty updates and releases caused almost every traffic peak on the Virgin Media network this year.

The year that got people talking

With people having to stay at home and socially distance, the nation picked up the phone more than before.

The most mobile calls were made on March 17th, shortly after the Prime Minister’s address to the nation about the national lockdown, with calls during this part of early lockdown lasting nearly twice as long (87 per cent) as before.

The most landline calls were made the next day, on 18 March, with the amount of time spent on fixed-line phone calls increasing by 21 per cent since last year.

The number of texts exchanged also increased by 72 per cent during the second half of March.

Staying up to date mattered

After an unprecedented year, staying up to date with world events became essential to people across the country. As a result, the viewing share of news channels increased by 56 per cent compared to last year.

During the US presidential election, viewers shifted in their droves to CNN which became the second most watched news channel after the BBC, with its viewing share increasing four times as people tuned in to see the latest results.

Documentaries and factual shows also soared in popularity in 2020 with viewership up by 23 per cent in lockdown, and 12 per cent year on year.

While news channels saw the biggest increase since last year, customers turned to entertainment for some light-hearted relief.

Traditional TV viewing on Virgin Media’s network was up by 8 per cent in 2020, with the third episode of BBC’s Strictly Come Dancing being the most viewed TV moment of the year, pipping ITV’s I’m a Celebrity…Get Me Out of Here! to the crown.

Paddington 2 was the most popular movie on TV, while England’s victory over Ireland during the international football friendly on 12 November was the most viewed sports moment of the year to date.

Meanwhile, streaming and on-demand viewing time leapt by 26 per cent, with Sky One’s Brassic topping the list of most popular boxsets, closely followed by Bulletproof, Code 404 and Manifest.

April and May were record-breaking months for boxsets with nearly twice as many views when compared to 2019 (up 90 per cent).

The 10 biggest peaks in upstream data traffic all took place on Friday and Saturday evenings between March and May, at the height of the first national lockdown, as the nation flocked to Zoom calls instead of pubs, restaurants and entertainment venues.

And in evidence of lasting change, after lockdown finished, the peak time for uploading data shifted to 3pm from 8pm, as many people continued to work from home.

During the record-breaking month of November, data usage varied significantly between regions. Customers in Northern Ireland top the table for overall traffic during the busiest 8pm-10pm period, with the North West experiencing the biggest growth when compared to last year (44 per cent increase).

When it comes to upload traffic, Londoners churned through the most data in November and the biggest increase in 2020 was seen in the East of England (23 per cent increase).

“These seismic shifts in behaviour show the dramatic effect of the pandemic on our lives and its lasting impact,” notes Dodds.

“In a year of unknowns, one thing that is certain is the importance of our services and we’re here to help people stay connected for whatever comes next, in 2021 and beyond,” he confirms.