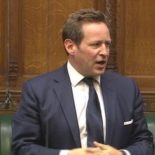 Former culture secretary Ed Vaizey could be on the shortlist of candidates to chair communications regulator Ofcom, according to Reuters.

Officials at the government’s Department for Digital, Culture, Media and Sport will narrow the list of applicants this week ahead of final interviews.

Ofcom’s responsibilities will expand in the coming years; It will become responsible for regulating harmful and illegal speech online, in addition to TV and radio services including the BBC, and broadband infrastructure.

Vaizey was culture minister from 2014 to 2016. He’s now a member of the House of Lords, as well as an executive at boutique bank LionTree Advisors LLC and an adviser at FTI Consulting.

The former editor of the Daily Mail newspaper, Paul Dacre. is also being considered, according to reports.