After more than a year navigating pandemic restrictions, the world’s first hologram dining experience has opened in London and Edinburgh.

Virgin Media’s ‘Two Hearts Pizzeria’ will connect diners located at opposite ends of the UK with a real-time, holographic dining experience. The pioneering technology, which involves the projection of life-size 4K holograms, means friends and family separated by the pandemic will be able to see, hear and interact with each other in real-time, as though they were sat together at the same table, without having to stare at a screen.

While the first-of-its-kind dining experience is physically split in two – with half of the futuristic pizzeria located on the Southbank, London and the other on Castle Street, Edinburgh – Virgin Media says that diners will feel closer than ever, despite being 400 miles apart, as a live hologram of their loved one seamlessly appears opposite them. The cutting-edge technology is , and makes it feel like diners are together in-person.

This comes as research from the broadband provider reveals half (50 per cent) of Brits are ‘bored’ of video calls with 63 per cent saying they don’t give them the level of interaction they need and want. With many friends and family still unable to meet in person, 31 per cent of Brits would prefer to keep in touch via hologram as it would help them feel closer (23 per cent) and more connected (24 per cent). More than a third (34 per cent) even suggest hologram calls could help keep the romance alive for those maintaining long distance relationships.

Futurologist and tech forecaster, Dr James Bellini, has predicted that hologram technology will become commonplace in homes by 2030: “Advancements in technology and lightning-speed broadband mean that pioneering forms of connectivity, such as holograms, are now viable options for when we want to feel closer to those we’re not physically able to be with. With technology moving as quickly as it is now, it wouldn’t be strange for holograms to be commonplace in UK households by the turn of the decade.”

Brits report being willing to welcome this new technology into their homes, as almost a quarter (23 per cent) say they see hologram technology being the norm in domestic homes within a decade. In fact, Brits think they are more likely to have this tech at home by 2030 than a cupboard which organises food by its use-by dates (15 per cent), a robot butler (8 per cent) or a self-sorting laundry basket (7 per cent). 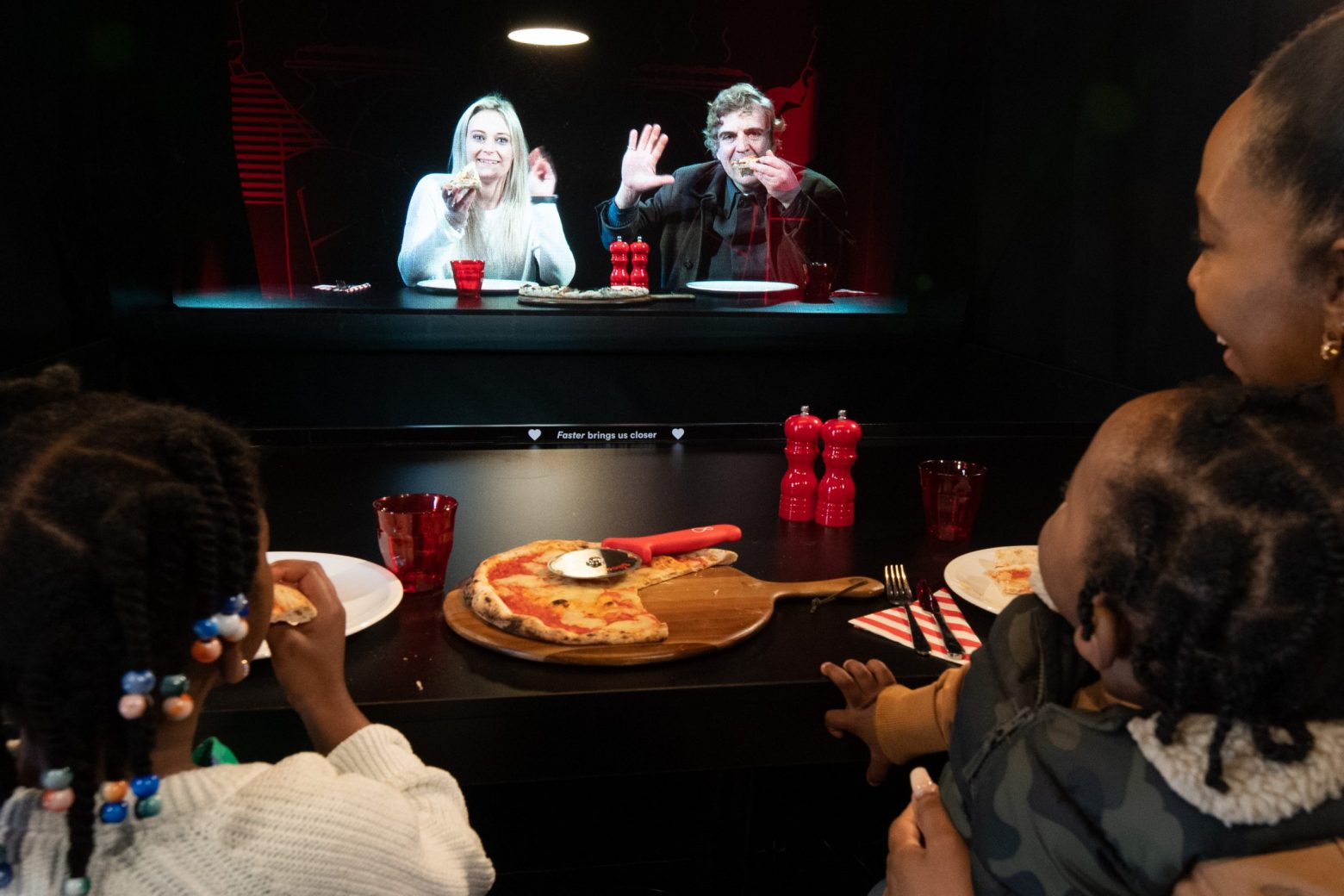 Bellini added: “Holograms can enhance our lives by removing barriers to human connection, be that screens or distance. A more frequent use of the tech could revolutionise the workplace, our social lives and events, travel and leisure or dining experiences. Having a 3D life-size, real-time connection with someone via hologram opens up a world of possibility and acts as a great starting point for those looking to re-adjust to normal life as restrictions ease, whilst relieving the longing of wanting to ‘be’ with another person. Although, accessible hologram technology is fairly new, the research from Virgin Media shows the appetite is there, meaning we’ll need the broadband speeds to keep up.”

The technology behind the hologram dining experience enables diners to make eye contact without gazing at a screen and has been made possible by Virgin Media’s gigabit network.

Jeff Dodds, Chief Operating Officer at Virgin Media, commented: “The past year has been a rollercoaster and the support of our loved ones has been more important than ever, be that in real life or virtually. The pandemic has accelerated the need to stay connected online and has created an opportunity to revolutionise the way we use technology, with many permanently changing their habits and behaviours as a result. The real-time holographic technology demonstrated at the Two Hearts Pizzeria is the natural evolution of the video call, and thanks to our gigabit network, we’re serving up a slice of the future.”