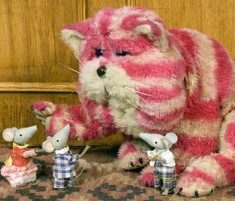 Iconic children’s show Bagpuss is debuting on the BBC iPlayer, with every episode arriving on May 30th.

Made by Oliver Postgate and Peter Firmin, the children’s stop motion animation was first broadcast in 1974. Despite only having 13 episodes, the programme has remained hugely popular across generations.

The puppet series is set in Emily’s shop, a home for lost property, where Bagpuss lives. As Emily leaves the shop, Bagpuss comes to life, as do his friends Professor Yaffle – a woodpecker shaped bookend – a toad called Gabriel, Madeleine the rag doll as well as mice ornaments from a magical mouse organ. Each episode sees the characters explore a broken object left in the shop, before repairing it and leaving it in the window so it can be reunited with its owner.

Patricia Hidalgo, Director, Children’s & Education says: “It doesn’t matter whether you grew up with Bagpuss, or it’s your first time visiting Emily’s shop – Bagpuss is one for all the family to enjoy. It’s great to be bringing this timeless series to iPlayer and it joins a fantastic selection of classic and new shows for all ages.”

The first episode of Bagpuss will be shown on BBC Four at 7.25pm on May 30th as part of an evening of classic children’s shows. The full box set will be available to stream on iPlayer until June 29th.