Jeff Bezos is just a few days away from his Blue Origin/New Shephard sub-orbital launch, scheduled for July 20th. But back at its Redmond (Washington state) headquarters, his Project Kuiper broadband-by-satellite team are readying its next steps.

Amazon’s Project Kuiper is licensed by the Federal Communications Commission to launch 3236 satellites into low Earth orbit. However, it is obliged to have that number in orbit by mid-2026. Bezos has reserved a number of United Launch Alliance’s giant Atlas V rockets to launch the initial fleet. Amazon has frequently talked of a $10 billion commitment to Project Kuiper.

Amazon has said that it could start Kuiper services once 578 satellites are in orbit.

One key element is the all-important send/receive antenna. Project Kuiper has shown a graphic of its dish technology design for a phased-array device. 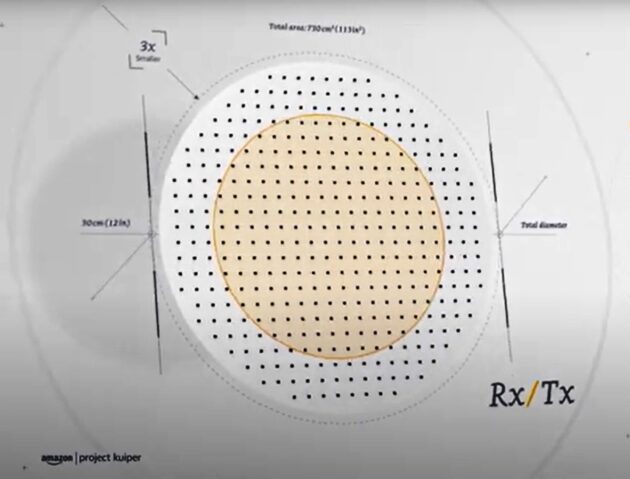 There’s also news that social media giant Facebook has moved “more than a dozen” of its wireless Internet experts to the Project Kuiper system. Facebook might well be an enthusiastic customer, but so would Amazon’s own Web Services division (AWS).

Amazon has already tested delivering 4K video from a test satellite, but – as yet – there is no news on when the Atlas V satellite launches will begin. Kuiper says that its tests managed data rates of up to 400 Mb/s.