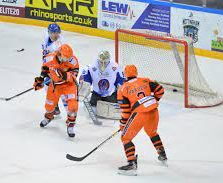 The Elite Ice Hockey League and Premier Sports have announced a partnership to further grow the professional game in the UK. Premier Sports will become headline sponsors of the Elite League for the next three years and extend their support as the exclusive television partner of the UK’s top ice hockey league.

“Premier Sports have been a great partner of ours for the past two seasons, and we’re delighted that we’re able to take this a step further in 2021/22,” said Elite League Chairman Tony Smith. “We’re very proud to be able to secure a new headline sponsor in the current climate, especially one that is as enthusiastic and passionate about growing our sport as we are. We have always believed in the value of our product, and this deal underlines that. Coupled with welcoming fans back into arenas, we can’t wait to get the 2021/22 Premier Sports Elite League season up and running.”

Richard Webb, COO of Premier Sports, added: “We have been supporting British Ice Hockey in one form or other for the last 10 years so are thrilled to be able to build properly on those early foundations with this 3 year partnership announcement. It is great that we are in a position to put proper investment into the League and we look forward to showcasing the Premier Sports Elite League weekly on our network.”

The first televised games will be announced shortly.