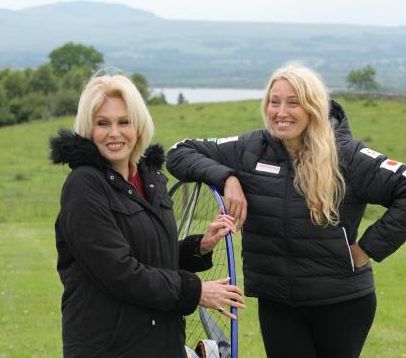 ITV has announced that it plans to put the environment front and centre for its viewers during the channel’s Climate Action Week, taking place from November 1st alongside the COP26 talks in Glasgow.

During Climate Action Week the channel will see a strong range of programming, from topical new commissions to coverage in ITV’s live daytime shows, news, current affairs and even quizzes.

New commissions include oscar-winning director Kevin Macdonald’s film, It Takes a Flood, which will go into the heart of the increasingly ferocious floods hitting the UK in recent years. In a one-off-special film, Joanna Lumley and The Human Swan (pictured), Joanna Lumley sets out to follow adventurer Sacha Dench, AKA the ‘Human Swan’, as she flies – green-powered – around Britain’s coast in search of climate change solutions. In Orkney – Britain’s Green Islands Julia Bradbury and ITV weather presenter Alex Beresford have travelled to Orkney to see how these beautiful islands are making progress towards a greener future. The concluding part of Save Money: My Beautiful Green Home airs during Climate Action Week, in which Ranvir Singh and property expert and designer Kunle Barker show how we can achieve the green dream of an eco-friendly home – without breaking the bank. And ahead of Climate Action Week, Love Your Garden heads to Salford to surprise a community hero with an eco-inspired kitchen garden.

For the first time in British television history, the country’s soaps and continuing dramas including Coronation Streetand Emmerdale are joining forces to highlight the issue of climate change and environmental issues, an idea originally conceived by Jane Hudson, Emmerdale’s Executive Producer. The episodes will air across the first week of November.

ITV News has extensive plans for COP26 which will be broadcast across regional and network bulletins as well as ITV’s digital output, with ITV’s flagship bulletins Early Evening and News at Ten, as well as Peston, in Glasgow during the conference. Building on ITV News’s long running ‘Earth on the Edge’ series examining the very real impact of climate change internationally and in the UK, and its ‘Last Chance To Save The Planet’ series spotlighting on solutions to the climate crisis, ITV News will bring viewers comprehensive coverage across platforms in the run-up, during and after the COP26 conference.

ITV’s live daytime shows Good Morning Britain, Lorraine, This Morning and Loose Women will all be covering Climate Action themes during the week, while The Chase will include ‘green-themed’ questions. The Pride of Britain Awards, broadcast during this week, will also include an inaugural Environmental Champion award.

In addition to a packed editorial schedule, ITV will also be running a Climate Action-focused behaviour change marketing campaign in its promotional airtime, encouraging viewers to make simple, easy swaps in their day to day lives that can add up to a powerful impact for the planet. The campaign will dramatise how making a small change can do more for the planet that you might expect from a small swap.

Beyond its on-screen programming, ITV also furthers its environmental goals through commercial partnerships under ITV’s sustainable partnership brand ITV Home Planet, including with eBay, who are the official sponsor of Climate Action Week, as well as new bespoke Home Planet campaigns from Polestar and Severn Trent Water.

ITV says it has a rigorous internal plan to, as a business, make significant progress on climate action. ITV has science-based targets to ensure the business meets its goal of net zero carbon emissions by 2030. These include a commitment by 2030 to reduce Scope 1 and 2 emissions by 46.2 per cent and Scope 3 by 28 per cent, setting a target to be zero waste by 2030, aiming for a 100 per cent sustainable supply chain, and 100 per cent of staff being trained in Climate Action. In addition ITV requires all its produced and commissioned productions to be certified by albert – BAFTA’s environmental organisation focused on reducing the waste and carbon footprint of the TV and film production industry. ITV also helped create the DIMPACT measurement system to quantify and help reduce the impact of digital content distribution.