In Q3 2019, research firm Ampere reported that the reach of live English Premier League (EPL) coverage had increased to nearly three-quarters of domestic fans as Amazon Prime Video acquired rights to 24 matches per season. Two years later, those with access to live coverage at home has increased from 72 per cent of UK fans to 80 per cent.

In a Blog post, Annabel Yeomans, Senior Analyst, notes that as stadiums, pubs and bars closed their doors due to the pandemic, at-home viewing became the only option for fans and it seems that they have adapted to watching matches from their sofas. Following the reopening of pubs and bars, just 4 per cent of fans reported having no at-home access but regularly going out to watch on big screens, compared to 8 per cent in Q3 2019.

“UK football fans have also not been put off by having to pay for a third platform to watch all of their team’s matches,” she suggests. “The proportion who have access to all three of BT Sport, Sky Sports and Amazon Prime Video has increased, largely driven by an increase in Amazon subscriptions.” 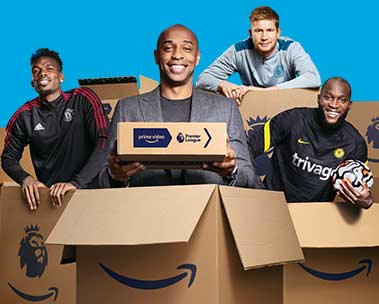 Reported Amazon subscriptions have increased by 30 per cent from Q3 2019 among UK consumers overall, increasing to 42 per cent among EPL fans. This suggests that while its TV and movie content is driving signups, Amazon’s Premier League coverage is an extra draw for those looking for match coverage. Those who can access live match coverage only via Amazon Prime now represent the largest proportion of EPL fans.

“Overall, in a time where lockdowns have posed a challenge to live sport viewing, Amazon’s rights continue to ensure that the vast majority of UK-based football fans are able to watch their favourite teams from home,” Yeomans concludes.

This season’s Premier League games to be shown on Prime Video can be viewed here.