Netflix has unveiled its first LGBTQ+ podcast – The Gay Agenda, produced by MOST, the home of LGBTQ+ storytelling. The new podcast aims to take an entertaining and honest look into the lives of LGBTQ+ creatives at the top of their fields across different industries and celebrates their success stories.

The Gay Agenda will launch on January 10th.

The podcast is created and produced by lesbian actress, singer/songwriter and podcaster Jasmin Savoy Brown (The Leftovers, Yellowjackets, Scream), who is also currently recording her first EP. She co-hosts the show with producer and nonbinary actor, comic and playwright Liv Hewson (Santa Clarita Diet, Yellowjackets, Let It Snow, Bombshell). On the show, Brown and Hewson interview queer trailblazers in the community and explore the LGBTQ+ experience. The show is also produced by Multitude, a podcast production company in Brooklyn.

Gabrielle Korn, Netflix Editorial & Publishing Manager for MOST, said: “With our first foray into the podcast space, MOST is entering a new era — one where the gay agenda continues to expand into all corners of our audience’s lives, making it easier and more fun than ever to discover Netflix’s LGBTQ+ talent, titles, and storytelling. I love this podcast so much; it’s truly a joy to listen to, and I hope it brings that same joy to our followers.”

Savoy added: “I’m proud of The Gay Agenda. It’s joyful, it’s inquisitive, it’s welcoming. I think it’s a real reflection of the LGBTQ+ community and I hope our listeners feel the same. Interviewing guests this season made me a better person. Hearing people’s unique stories and perspectives on life and happiness was a learning experience and I don’t take that for granted.” 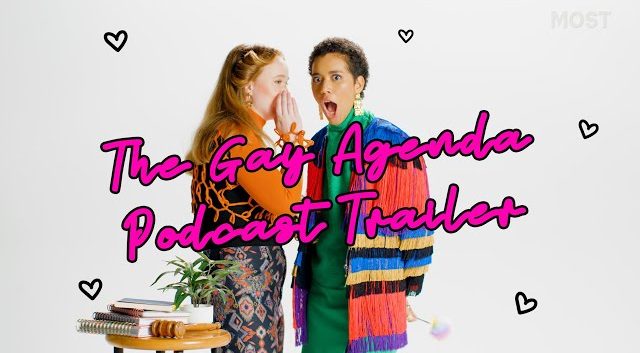 Hewson said: “The first item on The Gay Agenda is, of course, for our guests to have fun and be themselves. There’s room for all of it, for connection and healing and for irreverence and silliness. it’s serious and it isn’t. We contain multitudes! Part of the impetus behind this podcast was creating a space to talk about being LGBTQ in entertainment that centered on something other than pain. The pain is there of course, but the joy is too! We want to live in joy.”