Early Bird was the first-ever communications satellite to be placed into geosynchronous orbit and launched in 1965 to a spot over the Atlantic Ocean. The Early Bird satellite was the first to provide direct and nearly instantaneous contact between Europe and North America, handling television and telephony.

However, Early Bird had a twin. A totally duplicate satellite was built at the same time and as a ground spare in case of the loss or failure of the launched satellite. It is that duplicate, which has been on display at Intelsat for many years which in a ceremony on March 23rd was handed over to the Smithsonian National Air & Space Museum in Washington DC.

Early Bird was officially Intelsat 1, and through its four years of service, Intelsat 1 played a historic role in connecting humanity. It is credited with broadcasting the Apollo 11 moon landing to millions of TV viewers around the world, doubling the number of telephone lines between the continents, and providing other critical telecommunications and broadcasting services. 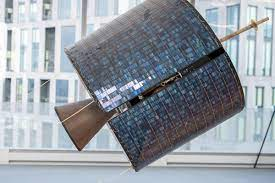 “This historic satellite’s new home commemorates its role in some of the most profound moments in human space exploration and global connectivity. Allowing people to witness the moon landing live inspired a generation of space explorers and enthusiasts. This reminder of Intelsat’s integral part in driving humanity forward only underscores how far Intelsat has come today and will continue to go in connecting our world,” said Intelsat’s out-going CEO Stephen Spengler.

“We are excited to collect the ground spare of the first commercial communications satellite to be placed in geosynchronous orbit,” said Jim David, curator at the National Air and Space Museum. “The Intelsat 1 satellite will be a featured among iconic artifacts like the Hubble space telescope and Skylab in a new exhibition opening in 2025.”