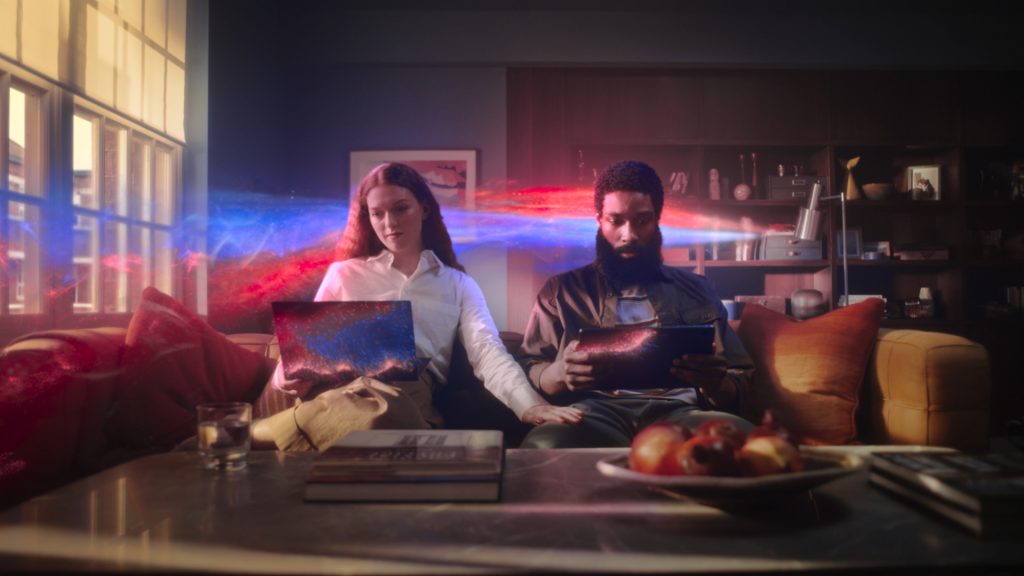 Virgin Media O2 has launched a multi-million pound integrated brand campaign to drive awareness for its joint proposition, Volt. Running throughout the UK for the next five weeks across multiple touchpoints, the campaign aims to demonstrate how Virgin Media and O2 are ‘Better, connected’ by giving customers more and supercharging the nation’s connectivity.

‘Volt’ will appear across multiple formats with a leading 60” spot that will premiere during the final of Ant and Dec’s Saturday Night Takeaway. The Volt proposition will also feature during a special in-show moment between the duo. This is a brand first ITV partnership, led by MG OMD, that will see Volt transform and supercharge the sets of iconic ITV shows. The 60” edit will debut across UK cinemas via a ‘Gold spot’ execution on the opening day of Fantastic Beasts: The Secrets of Dumbledore. Viewers are taken on a journey through multiple scenes which sees customers doing the things they love, powered by broadband and data. Volt visits the worlds of gamers, streamers, music-lovers and many more, as their worlds are supercharged by Volt’s connectivity. The film is driven along by Iggy Pop’s Lust for Life, remixed by The Prodigy, while British broadcaster and radio host, Julie Adenuga delivers the distinctive voiceover.

VCCP London worked with partners Electric Theatre Collective and director Rich Hall from Riff Raff Films to develop the look and feel of the film which take viewers on a cinematic journey.

The distinctive Volt energy bolt is used across every touchpoint of the campaign, sweeping across large format digital placements in OOH across the UK, with a special 3D extravaganza at the Piccadilly Lights – the largest advertising display in Europe. The display will use Ocean Outdoor’s 3D enabled deep screen technology to bring the Volt electric energy stream creative to life. An innovative approach has been taken with social, as Virgin Media O2 has partnered with content creators to produce social-first TikTok, Facebook, Instagram and Snapchat video ads that bring the transformative power of Volt to life however they want. As a fully integrated campaign, Volt will also roll out across VOD, OLV, audio and retail, including window vinyls.

The campaign showcases the core audience groups that Volt aims to speak to, from gamers for whom fast and powerful broadband is critical, to social media lovers, those streaming their favourite content at home and on the go, families who have teenagers and those who want to keep connected to loved ones. Virgin Media O2’s Volt offering will connect customers like never before, inside the home with brilliant broadband and outside the home with reliable mobile connectivity.

Discussing the new campaign, Simon Valcarcel, Marketing Director at Virgin Media O2, said: “At Virgin Media O2 we’re committed to connecting more people to the things they love, whilst offering them more benefits than ever before. With Volt, our customers can enjoy faster Virgin Media broadband speeds and double O2 mobile data, as well as exclusive extras all at no extra cost, simply for being a customer of both Virgin Media and O2. This campaign marks the next chapter of Virgin Media O2 supercharging connectivity across the UK, but with millions of people still facing the digital divide, we’re committed to helping end data poverty for good. Last year we supercharged our commitment to help more people and today I’m proud to say that Virgin Media O2 has now donated 23 million GB of data to the National Databank to help those who truly need it.”

Laura Muse, Creative Director at VCCP London, added: “The internet is so much more than dancing trends, comment sections or mundane work calls. Every single part of our lives depends on great connectivity these days – it makes us who we are. And as two of the UKs superbrands, no-one knows that better than Virgin Media O2. So what better way to show the power of Volt than our red and blue streams of energy literally transforming the world around us. Whether it’s impossible camera moves, blockbuster CGI or spectacular new OOH tech, this campaign really is supercharged and like nothing you’ve seen before.”

Emma Withington, Head of Planning at MG OMD, commented “Volt is an exciting proposition in a hugely competitive market. We had to bring both the art and science of media together to give this campaign the platform it deserves and grab the attention of the public. We are really proud of this work and it’s been a demonstration of real integration between ourselves, Virgin Media O2 and VCCP.”

Virgin Media O2 worked with agency of record VCCP London, VCCP CX and Girl&Bear to devise the new campaign ‘Volt.’ A consumer PR campaign will be run by Hope & Glory and media has been planned and executed by MG OMD.