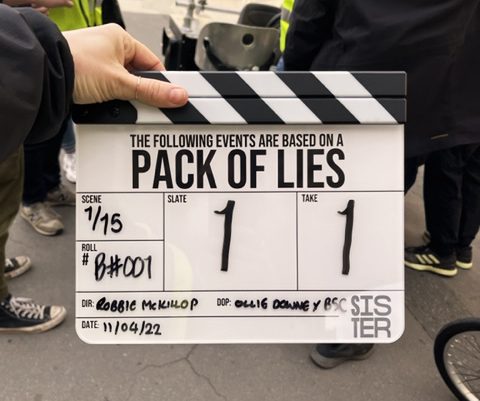 The BBC and Sister have announced that production has begun on the five-part thriller, The Following Events Are Based On A Pack Of Lies – the first original series from sibling writing duo Penelope Skinner (Fresh Meat, Linda, Briony Hatch – a graphic novel) and Ginny Skinner (Briony Hatch – a graphic novel), with Robbie McKillop (Guilt, Clique) boarding as lead director. The series will be distributed internationally by BBC Studios.

This is the story of two very different women (Alice Newman and Cheryl Harker) and the conman (Dr Rob Chance) they have in common; a dark, funny, and unpredictable thriller about three remarkable characters trapped in a tangled triangle of complexly layered half-truths and lies of epic proportions.

Directors for the series are McKillop and Nicole Charles (Hair Power: Me and My Afro) who will be directing three and two episodes respectively.

Creators Penelope and Ginny Skinner commented: “We couldn’t be more delighted that, thanks to Sister’s expert support and encouragement, this project has attracted such a talented group of collaborators to bring it to fruition. With Robbie McKillop and Nicole Charles’ insightful and creative direction along with an absolute dream cast, including stars like Marianne Jean-Baptiste, Rebekah Staton and Alistair Petrie, we are hugely proud that this show has found a home at the BBC. ”

The Sister team added: “We are so excited that this extraordinary cast has joined us to bring these scripts to life under the helm of such creative, collaborative directors as Robbie and Nicole. We feel incredibly lucky to be working with such a unique and talented team, and it’s testament to Penny and Ginny’s writing that we are.”

Jo McClellan, Commissioning Editor, BBC Drama, said: “The BBC are thrilled to begin production on The Following Events are Based on a Pack of Lies with this fantastic cast and the brilliant Sister production team. Penny and Ginny have written an incredibly fun show which highlights how susceptible we all are to the modern fraudster, how they are everywhere and hiding in plain sight.”

The Following Events are Based on a Pack of Lies is produced by Sister for BBC One and Executive Produced by Naomi de Pear (The Power, This is Going to Hurt, Flowers), Lydia Hampson (Fleabag, Cheat), and Director of Development Alice Tyler (The Baby, Landscapers, Flowers) and produced by Georgie Fallon (Dalgliesh, Criminal U.K) for Sister alongside Penelope Skinner and Ginny Skinner. Jo McClellan is Executive Producer for the BBC and Nawfal Faizullah is Commissioning Executive.