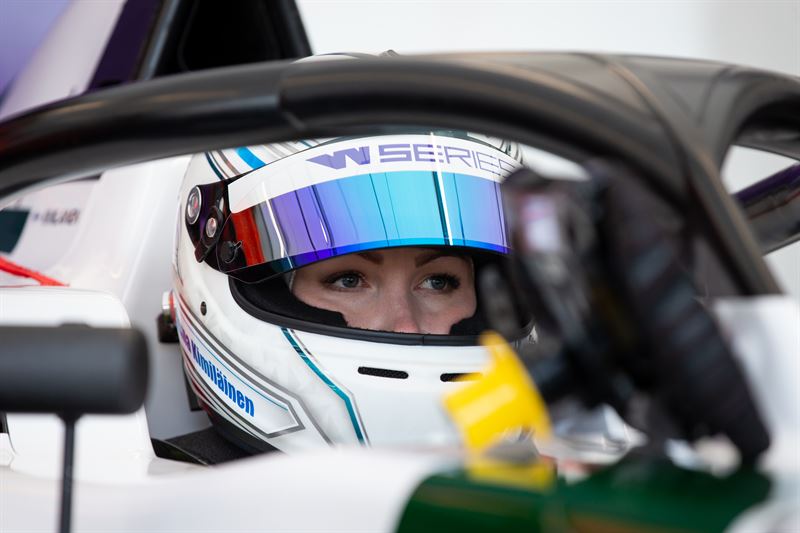 W Series will include ten races across eight Formula 1 Grand Prix weekends in 2022, and Sky Sports will broadcast live coverage of every qualifying and race session.

The three-year partnership – through to the end of W Series’ fifth on track season in 2024 – represents W Series’ largest media investment to date and will include distribution of W Series content across Sky’s channels, including linear, digital and social. The deal also increases the footprint of W Series coverage across Sky’s global platforms. As well as the UK, W Series will begin a new partnership with Sky Italia this season, adding to the series’ existing agreement with Sky Deutschland.

“We pride ourselves in being a good partner to sport and it’s been a privilege to work alongside Catherine [Muir] and her team to come up with a broadcast offering that works for everyone. I have followed the progress of W Series closely and it is clearly a very exciting time to be a part of this journey. At Sky Sports we are committed to making sport more inclusive and I can now proudly say that with the addition of W Series, every genre channel at Sky Sports now has both men’s and women’s sports coverage. We look forward to sharing the excitement of this upcoming season with our viewers,” added Licht.

Meanwhile, Channel 4 will carry highlight coverage of all ten W Series races. The coverage will include build-up, paddock insights and analysis, with every race also being available on demand on All4. Channel 4 will also broadcast the W Series race at Silverstone live on July 2nd as part of their coverage of the British Grand Prix Formula 1 weekend.

Channel 4’s Head of News & Current Affairs & Specialist Factual & Sport, Louisa Compton said: “The return of W Series is great news for motorsport fans and we’re very excited to bring viewers coverage of the 2022 season. The all-women motor championship perfectly aligns with Channel 4: innovative, boundary-breaking, and is sure to keep fans on the edge of their seats.”

Catherine Bond Muir, Chief Executive Officer, W Series, said: “I’m delighted to announce our landmark broadcast partnership with Sky Sports, which is another significant step in W Series’ continued rapid expansion […] This partnership enables W Series to continue to expand its viewership within the UK. Alongside Sky, Channel 4 will continue its free-to-air coverage of the entire W Series season with highlights of every race and will also broadcast live our home race at the British Grand Prix at Silverstone in July. With this broad broadcast offering, we have the perfect mix of coverage across our UK audience. W Series is an increasingly international series – more than half of the races during the 2022 season will take place outside Europe, including our first-ever race in Asia in support of the Japanese Grand Prix at Suzuka. Our broadcast partnership with Sky Sports reflects this, giving us great breadth of coverage across Sky’s global platforms and we’re excited to showcase incredibly exciting racing through fantastic content, direct to our fans.”