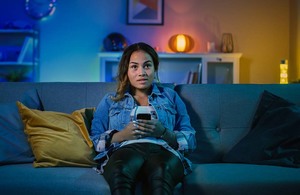 The UK’s Department for Digital, Culture, Media and Sport says that TV and radio audiences will enjoy a new golden age of programming as the government updates decades-old broadcasting regulations. The government plans to pursue a change of ownership of Channel 4 to give it the tools it needs to succeed in the future as a public service broadcaster while protecting its distinctiveness,

It says that rapid changes in technology, viewing habits and the emergence of global media giants have brought new challenges for UK broadcasters. More people are watching programmes on their phones, laptops, tablets, games consoles and on smart TVs. Competition for viewers and advertising revenue has intensified.

According to broadcast regulator Ofcom, the share of total viewing for ‘linear’ TV channels such as ITV and the BBC fell by more than ten per cent between 2017 and 2020. The share for SVoD services such as Netflix and Prime Video rose from six per cent to 19 per cent over the same period.

The DCMS says that plans in the broadcasting white paper boost domestic public service broadcasters (PSBs) which develop talent and skills, drive growth in the creative industries and deliver distinctive, diverse British content. It will allow them to compete fairly and continue to make shows loved at home and abroad and support the UK’s booming production sector, which is worth £3 billion, even before accounting for the success of the BBC, ITV and Channel 5’s own production studios.

UK public service broadcasters will no longer be subject to a complicated set of ‘purposes’ and ‘objectives’ from laws made in 2003. Their remit will be overhauled and simplified, with a new definition of what it means to be a PSB and a focus on creating distinctive shows which reflect British culture, support domestic film and TV production, and provide impartial and accurate news.

While making sure PSBs continue to serve audiences across the UK with universally-available high-quality programming, they will be given greater freedom and flexibility in how they can fulfil their public service obligations. They will be allowed to meet their public service requirements showing content on online platforms instead of just on their main channels as it stands today.

The government will legislate to make sure PSB content is always carried and easy to find for UK audiences on connected devices and major online platforms, including on smart TVs, set-top boxes and streaming sticks.

Proposals also include measures to protect audiences from a wider range of harmful material – such as unchallenged health claims – while watching programmes on video-on-demand services (VoDs). These services will be brought under UK jurisdiction and subject to a Video-on-Demand Code similar to the Broadcasting Code, enforced by Ofcom. Fines for breaches could be up to £250,000 or five per cent of annual turnover.

“Set against the backdrop of the digital transformation of our viewing habits, today’s plans will revamp decades-old laws to help our public service broadcasters compete in the internet age and usher in a new golden age for British TV and radio. This will provide jobs and growth in the future along with the content we all love.”

The white paper proposes that the opportunity to secure rights to air TV’s major sporting events such as the FIFA World Cup and Wimbledon be made an exclusive PSB benefit via reforms to the listed events regime. A review will also look at adding digital and on-demand rights to the scheme to ensure free-to-view access for the nation when watching the ‘crown jewels’ of sport on digital platforms.

Requiring it to continue to meet the obligations placed on PSBs, the government will move ahead with plans to move Channel 4 out of public ownership to become a privately-owned public service broadcaster like ITV and Channel 5. This will allow it to access greater investment to grow and create more great programming made by people who live and work in the UK without losing what makes it distinctive.

Under private ownership, the government will remove a restriction on Channel 4 which effectively prohibits it from producing and selling its own content. This will allow it to diversify its revenue streams and improve its long-term sustainability. Channel 4 will still be required to commission a minimum volume of programming from independent producers, in line with the quotas placed on other PSBs, to protect its contribution to the sector.

Channel 4’s existing obligations in terms of regional production outside of London and England will be maintained, as will its remit to provide distinctive, educational, innovative and experimental programming that represents the breadth of society, and obligations to show ‘original’ programmes and provide high quality news and current affairs.

The government will look to use some of the proceeds from the sale of Channel 4 to deliver a new creative dividend for the sector.

The government intends to legislate as soon as the parliamentary timetable allows.

The government has also published its response to the Digital Radio and Audio Review. The government will continue to engage with the radio industry to gain a better understanding of the policies and practices of smart speaker platforms, in order to ensure the UK has the best possible regime to allow radio to continue to reach its listeners well into the future.

Commercial PSB ITV said: “We welcome the government’s recognition of the huge value the PSBs deliver to the UK and its decision to introduce a Media Bill to deliver the necessary reforms to ensure PSBs can continue to thrive in future given market changes.”

“We will engage carefully with the substance of the White Paper once it is published, but many of its proposals – notably reform to prominence and inclusion rules, a more flexible approach to remits, and changes to the listed events regime – look very sensible.”

DCMS Committee Chair Julian Knight MP said: “The rules ensuring major sporting events are free to be enjoyed by all have failed to keep pace with rapid changes in audience viewing habits. With many more people now watching online or on catch-up rather than crowding round a TV with friends and family, the Government must ensure that the promised review of the listed events regime extends protection of the sporting crown jewels to digital and on-demand content. There is also now a perfect opportunity to expand the list of protected events to include more long-established centrepieces of our national sporting heritage, such as the Six Nations Rugby Championship.”

“With the proposals announced today aimed at helping public service broadcasters thrive, it is puzzling why there is a deafening silence on the role of radio and how it will be supported. This will need to be rectified if, as promised, audiences are to enjoy a new golden age of programming.”