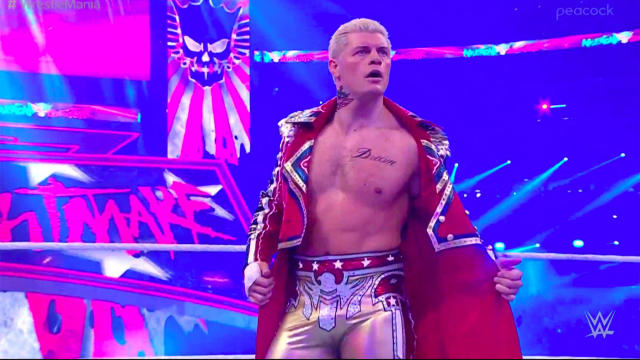 Ahead of tickets for the highly-anticipated WWE Clash at The Castle event going on sale, WWE Superstar Cody Rhodes – who made his triumphant return to the company at WrestleMania 38 – shared his thoughts on the UK spectacle, and the goals he’s set for himself now that he’s back with the WWE brand.

Presale tickets for the Clash at The Castle – which takes place at the Principality Stadium in Cardiff on September 3rd – go on sale today (May 18th) and on general sale on May 20th.

WWE Clash at The Castle is coming up in Cardiff, Wales on September 3rd. Are you excited about WWE’s first UK stadium show in more than 30 years?

As one of the biggest fans ever of SummerSlam 1992, I am shocked it’s taken this long. Clearly by the sign-up interest and the presale interest and everything that’s happening, this aims to be the biggest stadium show in the world. It truly does. It’s one of those things as a member of the roster, I’ve got to find my way onto it. I’ve got to find my way into a premium spot because I have watched SummerSlam 1992 so many times I can do the commentary almost verbatim. It’s our time now. It has been 30 years. It’s our time. It’s time for us to make our moment.

As one of the faces of the company, are you looking forward to touring the world with WWE and what are some of the places you are hoping to visit?

I’m very much looking forward to touring the world, not just because I have the opportunity to be a face of the WWE brand at the moment, but because we were closed off from one another for too long. I’m a global sports entertainer. I like to go everywhere. I did that when I was with WWE and outside the company, and then the pandemic happened, lockdown happened, so I am looking forward to going everywhere that this show goes. That’s what you’re supposed to do. You follow your show and WWE is seen in every country and in every language and I want to be able to connect with those folks.

Have you watched back your return at WrestleMania 38 yet? How does it feel to think back to that moment after you’ve now had some time to process it?

I have watched it back. I really never intended to watch it back though because of how good, no, how great it felt in the moment. Because WWE revisited it and showed it in packages, and it was all over RAW the day after, and it’s kind of connected to this return in such a large way, I’ve watched it all back in its totality and it is fun knowing where I was mentally coming down the ramp. Knowing the exact moment I decided to be the American Nightmare. That might sound peculiar, but I didn’t really realise what I was about to do and how I was about to do it until that first pyro blast went off behind me. In that moment I knew we were on another level.

You have mentioned that your Intercontinental Title run was one of your favourite times. Do you see another IC Title run for you in the future?

That’s a great question. The Intercontinental run was a massive, massive deal for me because I felt like it put me in the position to continue up the card. I think if I was to have the IC Title now, I would be less interested in my own selfish climbing up of the card and more putting the Intercontinental Title on a pedestal. That’s a bit of a calling card of mine. There’s a saying in the industry “the belt can make the man, or the man can make the belt”. I know that’s not the popular nomenclature that WWE uses, Title, Championship, it’s all the same in terms of what you can do for it. I think I could do wonders for it. My goal is the WWE Championship but there’s a lot of roads to get there. No pun intended. If it runs through the Intercontinental Title I would be more than proud to carry one of the industry’s most prestigious Championships.

The WWE Championship is the one that got away from your father. How important is it for you to fulfill that legacy and become WWE Champion?

I don’t want to say that it’s the most important thing in my life because I don’t want to put so much pressure on myself. If you know me and, fortunately and unfortunately, I have been so open and grown up in front of the audience that they do really know me, I think they know that it is the most important thing. That all the pressure in the world is on me to do it. It is the one that got away. No Rhodes got their hands on it. I have said it, made it clear, and if it goes unobtained that’s one thing but I just couldn’t let it go unsaid. With that in mind I have a habit of very much putting things out in the universe when it comes to sports entertainment and making sure they happen. I am a big, big proponent of sticking to your word. I would love to give my word to the WWE Universe that not only do I want it, but I am going to get it. Only time will tell.