The Boys Season 3: “Things get deeper and crazier” 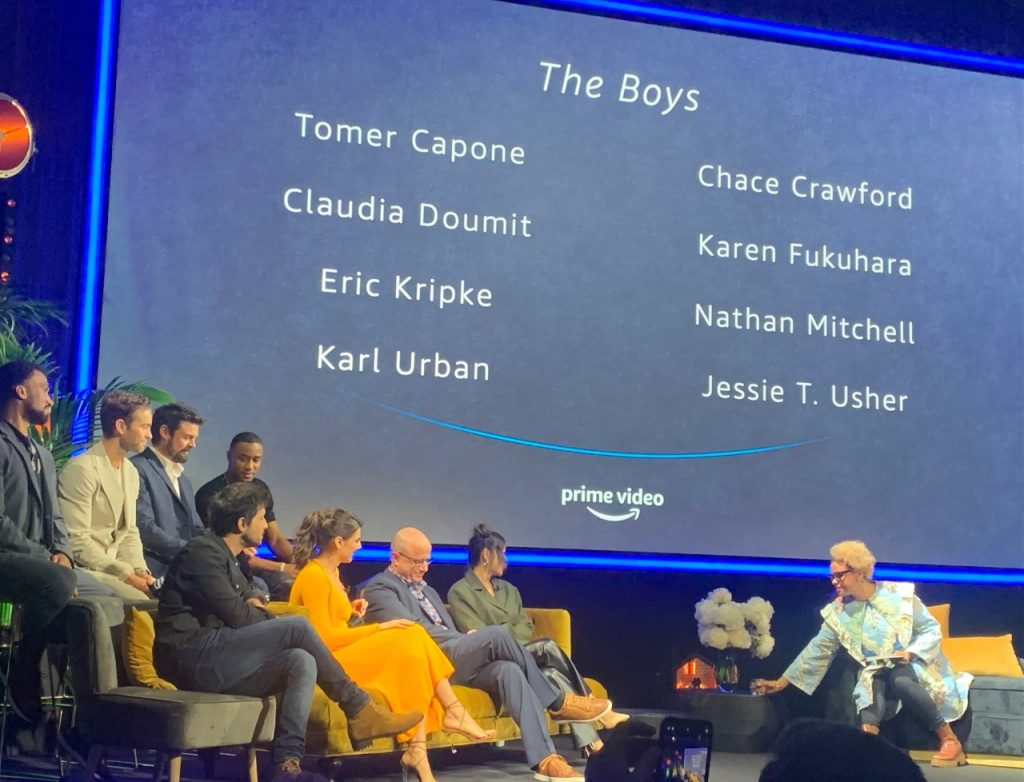 At the Prime Video Presents showcase in London’s Leicester Square, the cast of The Boys, along with showrunner Eric Kripke, took to the stage to reveal what viewers can expect from the upcoming third season of the superhero drama, and why they feel the show has become such a huge success.

Explaining where Season 3 begins, Kripke explained “[It] picks up one year later and it’s sort of peace time, everyone is generyally stable and happy which is unusual for our show, and everyone is trying to get on with their lives but the problem is Bully Butcher and Homelander who are both still simmering with rage and ready to destroy each other, so they manage to turh the cold war very hot and drag everyone back into the fight again.”

“Things get deeper and crazier than the previous 2 seasons,” he promised. “Prime Video have been very good about [the craziness], but for the first time they’re making us put a warning in front of one or two episodes, sort of like ‘This Isn’t Suitable For Any Living Person”…. but otherwise, yeah, they’ve been really good.”

“I think the fans will love it, I think it’s our best season yet. It’s our deepest and most emotional yet… and then there’s the madness […] It’s a satire about the world we are living in right now. Yes, it’s a superhero show, but to have an opportunity to really comment on things things that are certainly upsetting to me and the writers and the cast; to be able to talk about that has been a real gift; ou have a palce to put your rage, and I don’t take that for granted, we’re very lucky to have this show and be able to do that,” continued Kripke.

Karl Urban, who plays Billy Butcher in the show, commented: “I think one of the wonderful things the writers have done this season is look for opportunities to put characters together who we haven’t seen work together before, so there’s some really interesting pairings and defintily, I think across the board, the mandate wasn’t to try and top what we’ve done in previous seasons in terms of the action and the graphics – although I think we totally did that – but was really to dive deeper with the characters –  and I think that’s one of the reasons why this show is so loved because people genuinely enjoy spending time with these characters. The audience is going to find this season a really rich and rewarding experience on that basis.”

“We have such a deep bench of talent so when we’re writing, we try to make it all character based and it’s unusually grounded for a superhero show […] it’s rare to have a big cast and for everyvody to be a heavy hitter and so it’s fun to write for and it’s fun to see how they can draw emotion,” commented Kipke.

When quizzed on a favourite scene to film, Karen Fukuhara, who plays Kimiko, said: “Kimiko and Frenchie get a musical number [in Season 3] which was a suprise to me when I first read the script, and we had a lot of fun rehearsing together.”

Yomer Kapon, who plays Frenchie, quipped: “Working with these people it’s a jackpot […] we’re very good friends and we love what we’re doing.”

Speaking on the runaway success of the show, Urban concluded: “I don’t think any of us really had any idea how it would turn out, but I will say that there comes a point in every single season, every time you get a sript, there is a point when you read that script when your jaw hits the floor because you’re in complete shock, and then you go to set and it exceeds your wildest expectations […] we all feel really blessed that this show has found such a siginifcant audience [and] we just hope you guys have as much fun watching it as we had making it.”