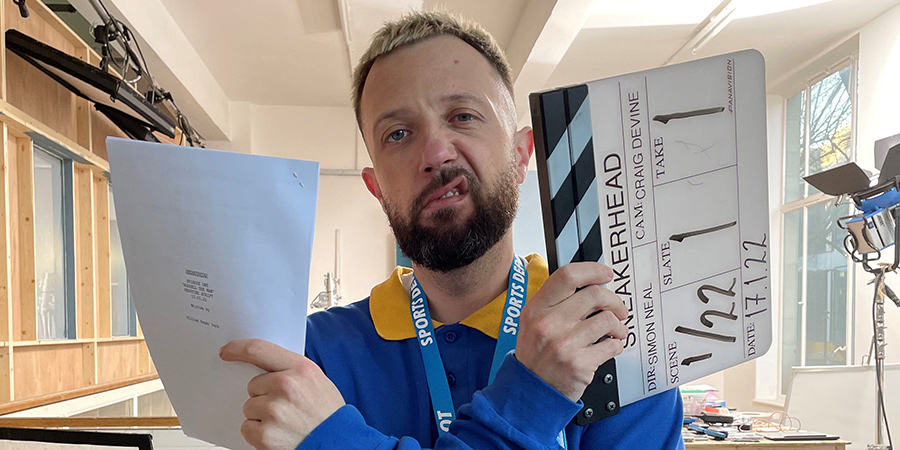 At London’s MCM Comic Con on May 29th, Hugo Chegwin – star of hit BBC mockumentary People Just Do Nothing and, more recently, Channel 4 comedy caper The Curse – took to the stage with fellow cast members to introduce new show Sneakerhead.

The contemporary workplace sitcom shines a light on young working life in Britain. Set in Peterborough, the series follows the hopeless, underpaid, demotivated but ultimately funny life of a gang of youths who find themselves working at their local Sports Depot store, possibly inspired by a real-life high street chain…

Chegwin plays not-so-youthful Russell – a self-confessed sneakerhead with little passion for his job – who, after nine years as an employee, finds the managerial position thrust upon him.

“I’ve worked in retail in a trainer shop and it’s not fun […] but a lot goes on there,” said Chegwin, discussing the creation of the show. “I had a lot of ideas and Steve Monger developed those into [the series].”

“Russell is about 20 per cent more pathetic than me; and I’m quite pathetic. I’m not really an actor, and when I worked at Foot Locker I was kind of lost [in life] and didn’t know what was next… and this applies to Russell, who’s been [at Sport Depot] for nine years,” explained Chegwin.

Speaking on the connotations of the show’s title, Chegwin said: “If you’re going to indulge in any subculture, and anything people care deeply about, you have to treat it with respect […] But Sneakerhead is just a title. It’s about one guy who likes that community, but really it’s about retail and working in a shop. It’s not about sneakers.”

“But maybe in the next series we’ll go even more in on that stuff”, he teased.

The show, despite its Peterborough setting, was actually filmed in Croydon, which Chegwin said was an enjoyable place to work, commenting: “It was good fun on set, we were able to have full creative control – I feel like I just messed around for 3 weeks at the expense of Dave [the channel that will host the series]. Croydon, in general, is insane, and I love it. People were coming into the [fake shop for filming] looking for trainers; people were trying to sell us drugs; there were rap battles happening in the street; Croydon is mental!”