Smart TV vs Smartphones: The Fight for Attention 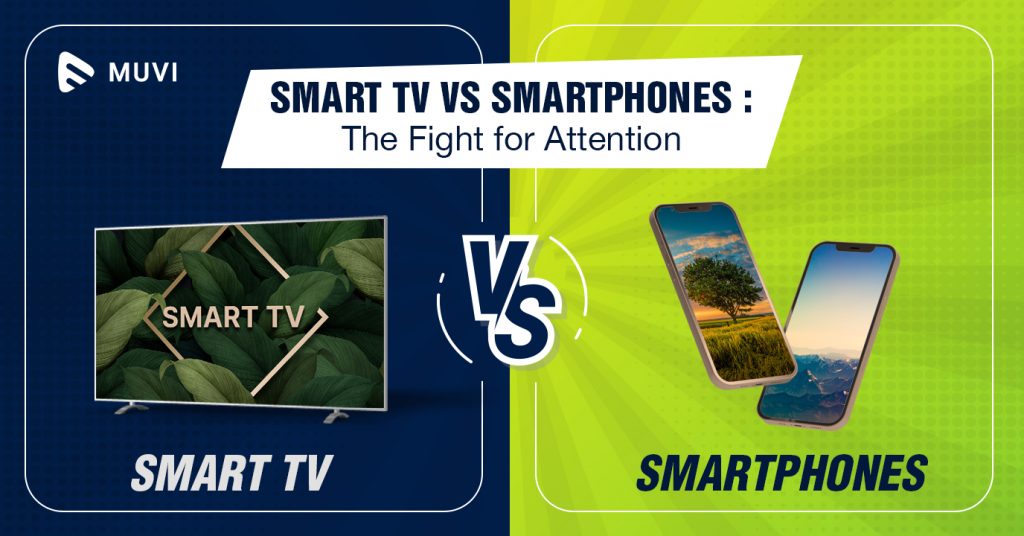 Anshuman Das, Founder & CEO of Muvi, has shared his thoughts on the battle for attention between smart TVs and smartphones, suggesting that it’s never between devices, and even less often between functionalities, but rather it’s all about convenience. He writes…

In the second decade of this century, the 2000s ushered in the concept of instant gratification and initiated the propulsion of door-step and on-demand services. It has to lead to a subconscious push in the development of technology in the same direction. Hence, when we talk about Smartphones vs Smart TVs, it boils down to how much convenience a particular device enables.

By sheer volume, one cannot carry a smart TV in their pockets and by sheer size, one cannot fully enjoy watching or have a cinematic experience on a smartphone. Keeping that aside, when most people prefer on the go services in particular geography or setting, then of course a device that is mobile in nature will take precedence. However, the onset of the era of the Covid pandemic led to the preference for ‘entertainment inside four walls’, and the development of smart TV applications took a central stage. Like the introduction of functionalities were preferred viewing time experience and access to multiple OTT channels on the TV, along with robust media players, multilingual language support and many other advances were introduced. Owing to the wave of change, we now see a huge surge in preference for smart TV, and hence what we will see further in our discussion are some facts and figures that show the dominance of the same.

Fight for Domination – A geographical phenomenon?

Since the inception of the OTT market, big screen devices such as smart TVs and connected TVs have showcased a steady growth over the years. While we are seeing an equalising effect in developed geographies on the adaptation of both big and small screens, like in North America whereas other developing geographies like Africa and Asia have seen an increased adaptation of the smart screen more than the mobile screen. The sheer amount of content pushed and popularity gained are telling of the win of big screens in the developing geographies.

Now, can we dedicate the adaptation of the big screen for developing geographies towards checking boxes of steps that any developing geographies go through? Probably yes! As, in any geography, the cost of owning a smart mobile is significantly lower than owning a smart TV. It cannot be ruled out that adapting to a small screen first, is more of an economic process than preference here.

As per our vision, in this case, an increase in purchasing power, combined with competitive pricing of the smart TV screen will result in a more favourable number of people preferring to watch content on big screens in the coming years before equalising like in the case of developed geographies.

Viewing Time and Minutes Per Play

If you consider content consumption based on viewing time by devices, smart TVs come up as the champion here. smart TVs favour family time, are a staple in binge-watching phenomena and also serve as a more immersive medium than smartphone screens. Smartphones are not just screens that allow entertainment streaming, they are also devices facilitating IMs and app notifications, so it is expected that quality viewing time suffers. Smart TV on the other hand is a completely immersive device that allows ease of viewing and heightens the experience of content consumption all over. It is a given hence, that view time and minutes per play go down with the screen size. It also depends on what other distracting functionalities that device holds – like a PC, a gaming device and a smartphone, all have varied other uses too, apart from the ability to stream content.

What the Future Holds?

As the world recovers and stabilises from the disruption in media consumption patterns caused by the global pandemic, streaming or OTT platforms will establish themselves as the mainstream medium for content consumption with smart screens dominating the consumer preference for watching long-form videos and smartphones for short-form video consumption.