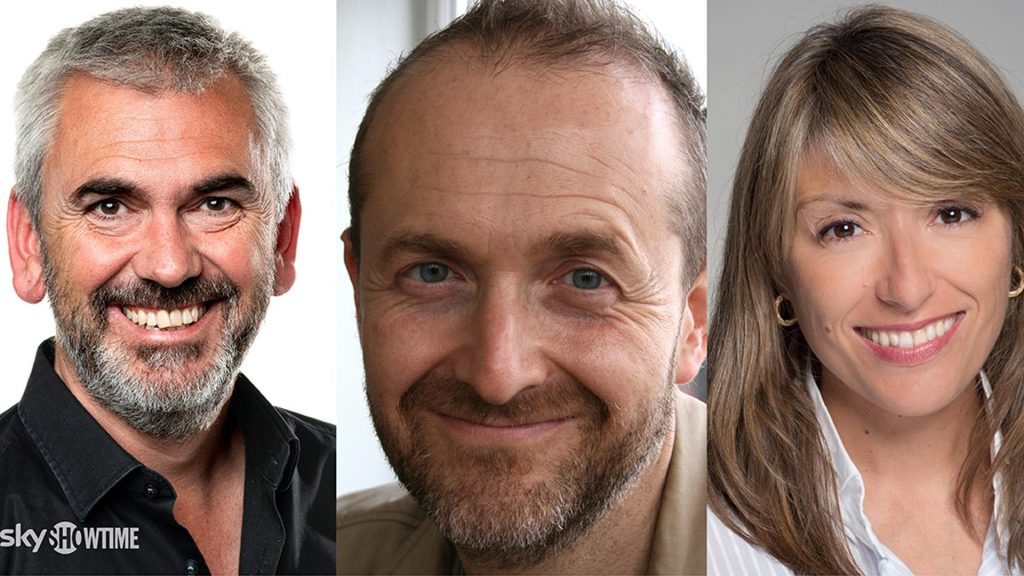 SkyShowtime CEO Monty Sarhan has announced three key senior appointments to the company’s executive leadership team. The announcement comes as the new streaming service prepares to launch in more than 20 European markets before the end of the year.

Sarhan commented: “A company’s greatest resource is its people and one of my top priorities has been to recruit individuals with a record of proven leadership to join SkyShowtime. These three talented individuals are all accomplished leaders who put people first – from our subscribers to our teammates – and I am proud that they will be joining us as we build the next great streaming service for Europe.”

The new appointments are:

Jon Farrar has been named Head of Programming. He joins SkyShowtime from BBC Studios, where he led their direct-to-consumer programming strategy in his dual role as Global VOD Director and Editor-in-Chief of BBC Select, the BBC’s branded SVoD service in North America. He was also part of the team that developed BritBox, the streaming joint venture between BBC Studios and ITV. Reporting to Sarhan, Farrar will be responsible for programming strategy, overseeing the service’s pipeline of partner studio content, and building a programming team across SkyShowtime’s markets to develop original and local content. Farrar will also lead the acquisitions, scheduling and editorial, and content operations functions.

Farrar said: “I am so thrilled to be taking up this role which, for a fan of great programmes, is the most exciting job in European streaming. I cannot wait to start working with Monty and the team on how we take a unique approach to bring SkyShowtime, with its brilliant content pipeline, to audiences across the continent.”

Raquel Berzosa has been appointed as Regional General Manager for Iberia. Berzosa will be responsible for expanding SkyShowtime in Spain and Portugal, building, and leading the regional distribution and partnerships group, and overseeing marketing and content across Iberia. She joins from NBCUniversal International Networks & DTC, where she was Vice President, Affiliate Sales & Country Lead, Iberia.

Berzosa stated: “This role is a dream come true for someone who is as passionate about entertainment as I am. I am thrilled to be joining Monty’s leadership team. The interest from distributors has been overwhelming and I look forward to bringing SkyShowtime’s amazing content to our audiences in Spain and Portugal.”

Richard Thurston joins SkyShowtime as Chief Human Resources Officer. Thurston will lead the HR team and support the leadership team, He joins the team after 10 years at Sky where he held several leadership roles, including his most recent Group role as HR Director and was instrumental in shaping Sky’s Group operating model. Before joining Sky, Thurston worked for the BBC as HR Director of the BBC News Group supporting teams across the globe and prior to this he spent 7 years at ITV. Thurston will report to Sarhan.

Thurston said: “I was fortunate enough to have been involved in laying the foundations of SkyShowtime since inception, so the opportunity to continue to be part of the journey of this unique business as it grows and connects to customers is hugely exciting. I am passionate about creating inclusive, supportive environments, where people can be themselves, innovate and grow. I look forward to working with the rest of the leadership team and welcoming great talent to SkyShowtime.”

Sarhan added: “With their passion for our content and commitment to our mission, Jon, Raquel and Richard will be instrumental as we prepare our roll out across Europe. I look forward to working with them.”

SkyShowtime will feature curated entertainment from some of the world’s most prolific studios and storytellers including television premieres of first-run theatrical films from Paramount and Universal; new scripted series from Showtime, Paramount+, Sky Studios and Peacock; local original programming; kids and family programming from Nickelodeon, DreamWorks and Illumination; and more.