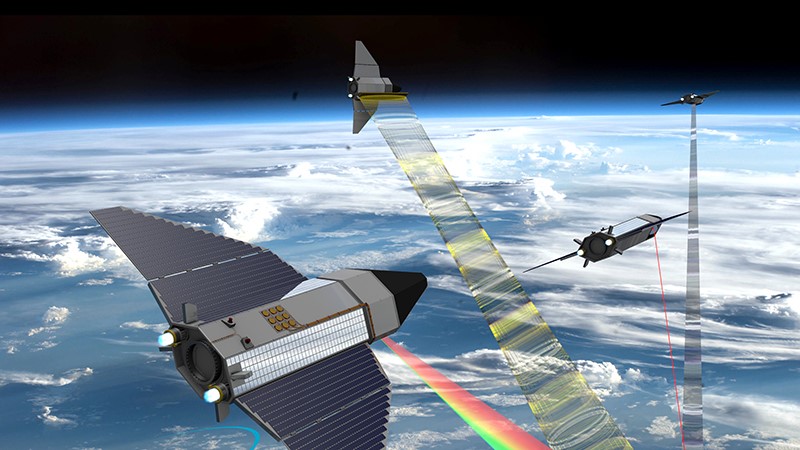 Operating satellites at orbital heights of less than 300 kms is seen as a solution to reduce the cost of satellite launching and making affordable performance. Thales Alenia Space and the Belgian team of the UK’s QinetiQ are backing the development of so-called ‘skimsats’.

The pair are working with the European Space Agency (ESA) and a contract signed to pave the way for small multi-mission satellites which will operate in Very Low Earth Orbit (VLEO).

“The Phase A/B1 study will advance the design of Skimsat demonstrator, a VLEO multi-mission (<300km) satellite that aims to significantly reduce the cost of Earth observation while increasing performance by operating at substantially lower altitudes. The highly modular, compact flexible satellite will capitalize on developments in high efficiency electrical propulsion to compensate for air drag,” says a statement.

The compact size of Skimsat will allow to be compatible with the launchers designed for small satellites with respect to dimensions, such as those currently being developed in the UK, to provide customers with substantially shorter lead times than traditional satellite launchers of similar capability.

The study is being led by Thales Alenia Space in the UK and QinetiQ Space team in Belgium and is funded under ESA’s Discovery Preparation and Technology Development (DPTD) activities. Payloads using the multi-mission Skimsat platform will be identified as part of the study for an In Orbit Demonstration to show applications in VLEO prior to the first commercial mission. This new initiative is fully included in the new space approach of Thales Alenia Space and reflects the company’s capability to address disruptive needs in partnership with smaller companies.

Operating at VLEO would normally mean that atmospheric drag would see the satellites re-enter and burn up within about 30 days. The new concept sees mission lifetime expanded to about 6-12 months thanks to onboard electric propulsion and the surface design of the craft.

Andrew Stanniland CEO at Thales Alenia Space in the UK commented, “This important study for an In Orbit Demonstration in VLEO brings together the technical excellence from our pioneering teams based in the UK, working in close partnership with QinetiQ Space team in Belgium. The Skimsat concept is a revolutionary innovation that stands to completely change the Earth observation market by challenging the traditional use of high altitudes that avoid air drag and by creating a new business model for high resolution imaging by using short lifetime and lead time and thus offering the market the benefit of more cost effective satellites.”