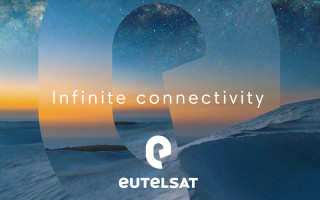 It emerged during a media and analyst briefing from Eutelsat CEO Eva Berneke that the company’s suspension of its dividend payments to shareholders could extend beyond the already announced 2022-2023 and 2023-2024 trading years. This current year’s dividend of €0.93 will be paid, subject to Board approval, in November 2022.

Berneke declined to commit specifically to the trading year when a dividend would be reinstated, saying only that a return to paying dividends is expected during the “medium term”.

The news did no favours for Eutelsat’s already beleaguered share price. It crashed 18 per cent on July 25th, and tumbled another 18.2 per cent on July 26th. Since July 25th, its share price has fallen from €10.65 per share to €7.01 on the afternoon of July 26th. The agreement to merge with OneWeb might have secured institutional investor support but individual and small shareholders seem not to be quite so keen.

Some 6 million shares changed hands during July 26th and while this is a modest amount compared to the total 230 million issued shares, the end result managed to shatter Eutelsat’s market capitalisation to just €1.98 billion.

There have also been negative comments from industry analysts. Credit Suisse, for example, was surprised that the two companies are merging, saying: “We laid out our expectation for the addressable market to reach about $9 billion in annual revenues with more than half of those revenues coming from B2C broadband in the US and Western Europe, a market in which OneWeb does not compete.”

Berneke joined Eutelsat on January 2nd 2022 when Eutelsat’s share price was at €10.88. Since then, it has lost around one-third of its value.

The retained dividend payments, typically around €220 million annually, will help fund the operator’s Capex funding and in particular design, build and launch of OneWeb’s ‘Generation 2’ satellites.

OneWeb’s CEO Neil Masterson told analysts that the company’s current situation was that it had 428 satellites in orbit, of which a few were still orbit raising. It needed 588 to be in orbit to complete a global service. Meanwhile, OneWeb was already providing connectivity to many extreme northern latitudes including Canada, Alaska and Greenland and were conducting trials in other northern European countries.

Masterson added that OneWeb’s Gen 2 satellite specification and design already enjoyed input from Eutelsat which was “totally involved” in their development.

Masterson did not talk about the actual costs of OneWeb’s ‘Gen 2’ craft either individually or as to the costs in total for the expanded fleet.

The likely Capex needs amount to around €725 million-€875 million per annum for the combined Eutelsat/OneWeb business for the trading periods between 2023-2024 and as far forward as 2029-2030. This covers Eutelsat’s own satellite fleet development but also the costs related to OneWeb’s ‘Gen 2’ needs which in the past have been said to be some $3 billion in total although Credit Suisse, in its report on the merger, said it expected OneWeb’s ‘Gen 2’ craft to cost “closer to the $10 billion” spent by Amazon and SpaceX.

The combined businesses should be united by mid-2023 with all necessary approvals in place. Thereafter there should be annual cost-savings and Capex synergies measured at some €80 million in Year 1 and growing thereafter.

Much has been made in media briefings as to OneWeb being a rival to Elon Musk’s Starlink broadband by satellite service. Not so. While Starlink is serving corporate as well as individual users, OneWeb will serve telco and not have a retail presence with consumers. Amazon’s Project Kuiper will compete with Starlink, but OneWeb is strictly for telcos and other major clients and not individual users.