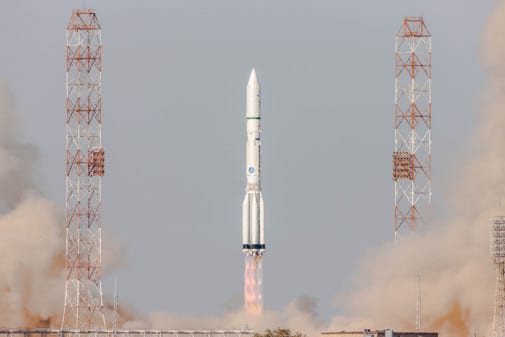 Further details following on from Eutelsat’s end-of-year financials show that the satellite operator earned €78 million from its Russian broadcasting clients. However, it is also owed $37 million (€36.17m) by International Launch Services (ILS) which commercialises the launches of the Russian ‘Proton’ rocket.

ILS is US-based in Reston, Virginia, but uses Russian-built rockets (made by Moscow-based Khrunichev State Research and Production Space Center) and launched from either the Russian-controlled Baikonur launch site in Khazakhstan or the Russian Vostochny (Far East) facility.

Eutelsat has been a regular user of ILS and its Proton rockets. The last Eutelsat launch on a Proton was for Eutelsat 5 West B satellite back in 2019. Eutelsat signed a Multi-Launch Agreement with ILS in October 2015 although it is not known whether that Launch Agreement refers to the $37 million outstanding payment from ILS. At the time the Agreement was signed, it referred to a Eutelsat launch happening by 2020.

However, ILS has been extremely quiet since that Eutelsat launch in 2019 and has not carried out any commercial launches.

The Russian channel activity covers leased capacity by Eutelsat on four TV broadcast satellites (Express AT1, AT2, AM6 and Express 36C) owned by Russian Satellite Communications Co (RSCC) which Eutelsat then re-sells to its Russian clients.

Eutelsat says that its Russian clients were up to date with their payment obligations. Eutelsat insists that it is wholly complying with EU and French sanctions on Russia and Russian businesses.

The ILS payment of $37 million comes about because of a terminated launch contract. “The ability to recover this receivable will be reassessed at regular intervals as required by developments in the situation,” states Eutelsat.

Eutelsat has already received $125 million as compensation for its hand-over of C-band frequencies over the US. It will receive a further $382 million once Phase 2 of the process is completed.