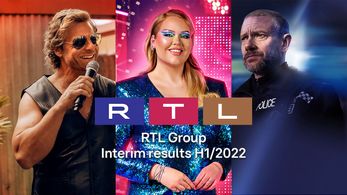 Group revenue was up 8.7 per cent to €3.276 billion (H1/2021: €3.014 billion), mainly thanks to the strong performance of RTL Nederland, higher streaming revenue, scope effects at RTL Deutschland (from the acquisitions of Gruner + Jahr and Super RTL) and Fremantle as well as positive foreign exchange rate effects.

“RTL Group had a solid first half of the year 2022, despite the growing economic uncertainties resulting from the war in Ukraine, increasing inflation and supply chain,” said Thomas Rabe, Chief Executive Officer of RTL Group. “Thanks to our investments into streaming and content and the strong performance of RTL Nederland, our first-half revenue reached a new record level of €3.3 billion. Despite significantly higher streaming start-up losses and a slowdown of the TV advertising markets since March, RTL Group generated a higher Adjusted EBITA – once again demonstrating our ability to generate strong financial results even in challenging conditions.”

“Given the challenging macroeconomic environment and its impact on advertising markets in particular, we have decided to revise RTL Group’s outlook for the full year 2022. RTL Group now expects its Adjusted EBITA to come in at between €1.05 billion and €1.15 billion including streaming start-up losses and €1.3 billion and €1.4 billion before streaming start-up losses.

“RTL Group continues to deliver on its targets for its growth businesses of streaming and content. Our streaming services continued to grow dynamically and passed the 4.5 million paying subscriber mark. In the second half of 2022, we will expand RTL+ to become a cross-media entertainment service. Our content business is also accelerating, with five acquisitions and step-ups in the past six months, major talent deals and 30 planned films for 2022.”

“We have also made significant progress in executing our strategy to establish national cross-media champions. The integration of RTL Deutschland and Gruner + Jahr is progressing according to plan, and we sold RTL Belgium and RTL Croatia. We expect the competition authorities in France and the Netherlands to decide on the proposed combinations of both Groupe TF1 and Groupe M6, and Talpa Network and RTL Nederland in autumn. We remain convinced that market consolidation is necessary to compete with the global tech platforms.”