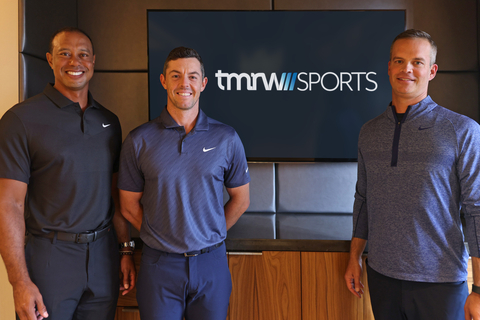 “I am excited to work with TMRW Sports in bringing people more access to sports,” declared Woods. “So many athletes, entertainers, and people I meet from all walks of life share our passion for sports, but they also share our desire to build a better future for the next generation of sports fans. Together, we can harness technology to bring fresh approaches to the sports we love.”

“For the last few years off the course, I’ve been focused on helping to lead golf into its digital future,” added McIlroy. “Now, by joining forces with Tiger, Mike, and other TMRW Sports partners, we can shape the way that media and technology improve the sports experience. In a world where technology provides us with so many choices for using our time, we want to make sports more accessible for as many people as possible.”

“Both Tiger and Rory’s competitive spirit extends beyond the golf course, and both have proven track records in supporting ventures that are modernising the way sports are played, enjoyed, and consumed,” commented McCarley, founder and CEO of TMRW Sports (pronounced ‘tomorrow sports’). “As we begin this journey together with the strong support of a diverse team of investors and partners, we’re focused on accelerating the evolution of sports with several interesting projects in development.”

In addition to investments from Woods, McIlroy, and McCarley, Dick Ebersol is an initial investor of TMRW Sports. Ebersol, a sports and entertainment industry icon, is the former chairman of NBC Sports and executive producer of many of the most-watched events in television history, including the Olympics and Super Bowls. In addition, he was the creator and executive producer of NBC’s Sunday Night Football, the longest-running No. 1 primetime programme in American television history, as well as creator and producer of game-changing entertainment programmes, including Saturday Night Live, which he co-created with Lorne Michaels.

“Mike and I worked closely together for years; he was one of my most-trusted advisors and confidants, especially in regard to our biggest priorities with the NFL and Olympics,” said Ebersol. “Since I retired, I’ve refused any real work besides giving advice for plenty of friends, but this is the right idea at the right time with one of the few people I would do this with. Mike and I have remained close and knowing him, his impeccable track record in business and, most importantly, witnessing first-hand the way he approaches relationships — I would bet on anything he creates. So, when he told me about his vision for what he was building with Tiger and Rory, I couldn’t wait to find a way to get involved.”

Additional partners and investors, as well as early projects in the TMRW Sports pipeline, will be announced soon.

For Woods, TMRW Sports joins his TGR Ventures portfolio, which includes PopStroke, Full Swing Golf, TGR Design, The Woods Jupiter and Heard. TGR unites Tiger’s entrepreneurial and philanthropic endeavours off the course under a single parent brand driven by a mindset, method, and pursuit of mastery.

As an NBC Sports executive for more than 20 years, McCarley was part of a core team that shaped many of the biggest events in sports. Previously, McCarley served as NBC Sports’ president, golf, and global strategy from 2011-2021 and led NBC’s golf portfolio, including golf coverage across NBC Sports and Golf Channel, as well as its digital platforms to modernise the golf experience, including GolfNow and GolfPass.

As president of Golf Channel, he quickly transformed the network, including several years as the fastest-growing network on American television. In this role he developed close relationships with Woods and McIlroy and their respective teams. Prior to leading NBC Sports’ golf businesses, McCarley was senior vice president at NBC Sports, primarily focused on marketing the company’s biggest events, including Sunday Night Football and the Olympics. McCarley, a three-time Emmy Award winner and inductee into the Sports Business Journal’s 40 Under 40 Hall of Fame, also serves on the board of directors of the Arnold & Winnie Palmer Foundation and National Golf Foundation.