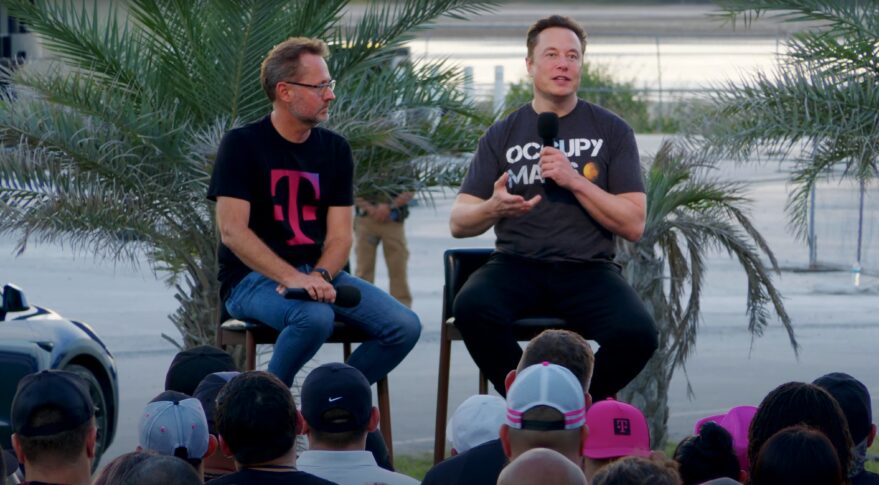 At an event August 25th (dubbed ‘Coverage: Above & Beyond’) T-Mobile’s CEO and President Mike Sievert and SpaceX’s Elon Musk announced what they described as a breakthrough new plan to bring cell phone connectivity everywhere on the planet.

The CEOs shared their vision for expanding Coverage Above and Beyond globally, issuing an open invitation to the world’s carriers to collaborate for truly global connectivity. T-Mobile committed to offer reciprocal roaming to those providers working with them to enable this vision.

“The important thing about this is that it means there are no dead zones anywhere in the world for your cell phone,” said Musk. “We’re incredibly excited to do this with T-Mobile.”

The pair announced that SpaceX will use a portion of T-Mobile’s existing 5G spectrum, the ‘mid-band Personal Communications Service’ to allow Gen-2 Starlink satellites to connect directly to cell phones.

This satellite connection will be limited – at only 2-4 megabits per cell area – but it will be enough to allow T-Mobile customers on a standard plan to send text messages or make phone calls even in some of the most remote areas of the globe.

Musk said this speed is enough to support one or two thousand phone calls per cell area.

However, potential users will have to wait until Musk’s Gen-2 satellites, with their much larger antennas, are in orbit. They’ll start launching in 2023.